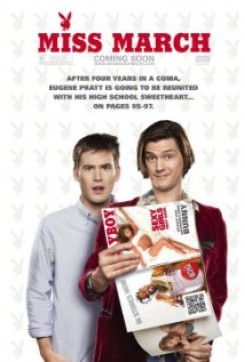 Eugene (Zach Cregger) and his high school sweetheart have been saving themselves for marriage. But when a freak accident puts Eugene in a coma, he wakes up four years later, only to learn his abstinence-advocating girlfriend is now a Playboy centerfold.

A Playmate holds a dog in her arms. Tucker (Trevor Moore) grabs it from her, holds it under its arms with his arms extended, and walks away. A male Yorkie mix named Philly played the woman's dog. Cast and crew members were introduced to the dog and instructed on his proper handling, and the actors were well-rehearsed for the action. Trainers called the dog while the actor held him, making the dog appear to struggle (toward the trainers' calls). Moments later, while the actor is still holding the dog, the dog urinates into a glass. For this shot, the dog was equipped with a special hidden tube attached to his leg, and colored water was released from the tube into the glass. The dog was well-rehearsed for this scene.

Later, Tucker holds the dog by his underarms over a glass. He then briefly places a wine glass next to the dog's genitals, and puts a beer bottle near the dog's mouth. The dog and actor were well-rehearsed for this mild choreographed action. The dog's mouth never actually touched real alcohol.

American Humane also monitored a scene in which it appears as if a dog is thrown over a balcony. This scene did not appear in the theatrical release.