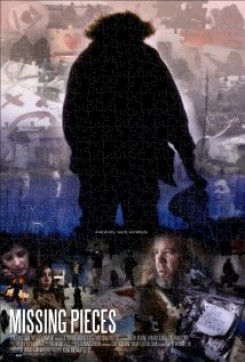 Missing Pieces is a comedy about Lou Whimpole, a cellist, and his agent, Wendell Dickens. Wendell learns that he is to come into an inheritance left to him by his late, last adoptive parent, Chen Yu Who. When the bumbling pair go to the lawyer's office to see what type of wealth Wendell has come into, they find that the only thing Chen Yu had left Wendell was a riddle. Both are puzzled and slightly depressed. As they leave the lawyer's office, they notice that they are being followed by a very shady character, who makes an attempt on their lives. They flee to Wendell's apartment, only to discover that it has been ransacked, and the prowler is still there. The prowler turns out to be a police detective who warns the pair that they have inherited the Soung Dagger from Chen Yu Who and that they will be in danger until they have it safely in their possession. Wendell and Lou take us through their absurd adventures as they try to solve the riddle which will lead them to the dagger.

In one scene as Lou and Wendell are trying to get to a rehearsal on time, Wendell runs into a woman getting out of her car with her Great Dane. They go tumbling to the ground entangled in the dog's leash. The dog, thinking that everyone is playing, becomes very excited and starts to hump the tangled mess of people on the ground. This dog action was not planned. The spirit of the film moved the dog and he improvised his own scene. In another scene Wendell and Lou are riding in a carriage pulled by a horse.