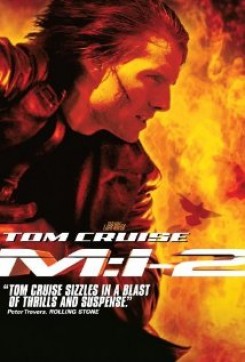 Mission Impossible II is action packed from beginning to end. Tom Cruise plays Ethan Hunt who accepts another almost impossible mission. This time he races to stop a man who is trying to spread a deadly virus, which would destroy the world.

Filmed in beautiful Australia, the cameraman captures birds flying and kangaroos running in their natural habitats. There are sheep are grazing in an enclosed pasture. A helicopter lands in the middle of the pasture and the sheep run from it. This enclosure was located on an actual sheep farm in the province of New South Wales. The animals were hired from the farmer and transported in and out of the actual filming location via roadtrain sheep carrier.

There is a long sequence which takes place at a horse race track. This was stock footage used from an actual horse race shot at Randwick Race Course in Sydney, Australia. The shots of the horses walking with their jockeys in the paddock after the race were filmed at this same race.

All pigeon and dove sequences were actual birds staged as live action with the actors under the supervision of The New South Wales Animal Welfare League of Sydney, Australia. The Animal Coordinator had regular consultations with the Welfare League throughout the filming of these scenes. The dove that flies through the flames is computer generated.