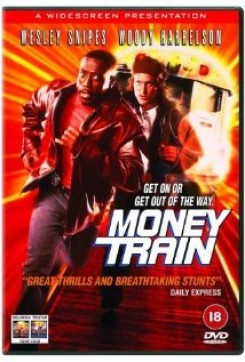 Money Train is an action packed film about two New York transit cops who are foster brothers. John is black and Charlie is white. As one of the best undercover teams in New York, it is their job to make sure the armored subway train that collects the day's fares arrives at its destination without any complications. After a few mishaps in the subway involving the money train, Charlie and John receive a final warning from their superior, Chief Patterson, that one more mistake and they're gone. Charlie is put on suspension after a bungled stake-out which endangers the lives of some children and the money train's route. Adding to Charlie's troubles is his gambling addiction which has lead to a $15,000 debt and lone sharks breathing down his neck for collection. With only one day left to come up with the money, he decides to rob the money train on the busiest day of the year, New Years Eve. After successfully highjacking the train, John catches up with Charlie but fails to convince him to walk away. With the hope of changing his brother's mind, John stays aboard the train. Their wild ride has begun and neither one knows where it will lead them.

When Charlie bungles the stake-out, the thief gets away and a chase ensues through the streets of the city. During the chase, a carriage horse gets spooked, rears, and runs down the street, heading straight for two children. Charlie runs across the street, grabs the children and falls to the ground, rolling the three of them to safety. This scene was filmed in cuts. For the rear, the trainer was hidden in the carriage and merely gave the horse an "up" signal. There is a close up shot of the horse's hooves as it races down the street. This was filmed from a vehicle that drove alongside the horse/buggy. So as not to spook the horse, the vehicle was never closer than 20 feet. When Charlie jumps in front of the buggy to save the children, he is actually grabbing two dummies. Other animal action includes a scene where three policemen are seen on horseback in the park talking to each other. The horses are never involved in any movement for this shot. A rat is also seen when Charlie is attempting to highjack the money train.