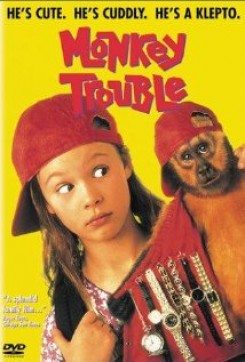 Monkey Trouble is a family oriented comedy about Dodger, a Capuchin monkey who had once belonged to petty criminal, Shorty. Dodger has been trained to steal money, jewels, and everything else imaginable. While performing yet another robbery in a suburban neighborhood, Dodger climbs into a window and meets a young girl, Eva Gregory. The two become inseparable as Eva hides Dodger in her room, lying to her parents who have forbidden her to keep any pets in the home as of her step-father is allergic to animals. Meanwhile, Shorty is desperate to recapture the monkey so he can put him back to work in his crime ring. In the process of escaping from Shorty, Eva and Dodger both learn that crime and lying do not pay. They mend their ways and Dodger becomes a permanent member of the Gregory family.