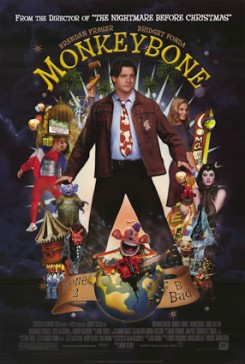 Brendan Fraser plays Stu Miley, an imaginative cartoonist who, in a bizarre twist, finds himself trapped inside his own surreal fictional world.

Buster's Moves Stu's girlfriend Julie (Bridget Fonda) owns a dog named Buster. Buster the dog was played by two talented Basset Hounds named Fred and Madison. Buster is not particularly fond of Stu, and he displays his lack of affection throughout the film. In one scene, Buster runs into the room and upon seeing Stu, suddenly growls and lunges at him on the couch and appears to bite his hand. To accomplish this, the trainer released the dog and verbally cued it to growl and jump onto the actor. The actor was instructed to put his hand into the dog's mouth, but the dog did not actually bite his hand. Later, Buster chases Stu in circles in a yard. Buster jumps up and down as Stu wrestles with the feisty hound. Stu ends up spraying the dog with "nightmare juice"-which was actually chicken broth. Trainers worked with the dogs for 3 weeks to accomplish the action in this scene. The trainer would cue the dog from off camera to "stay" and "lie down" while the actor simulated wrestling with Buster. As a result of the "nightmare juice" exposure, Buster experiences a terrifying dream. In it, Buster lies spread eagle in front of a rather large cat who threatens the dog's manhood with a pair of giant scissors and a sadistic grin. To achieve this, the cat was placed inside of a veterinary restraint mechanism-to prevent the cat from harming itself-that was then placed into a large cat suit. The suit had plastic shears already attached to the fake paws. The cat body was placed on an L-stand with wheels that was slowly pushed forward during the scene. Trainers worked with a few cats for several weeks to acclimate them to the cat suit. Other props for the scene include Buster's leg shackles, which were actually made of tinfoil and Velcro, and a lightweight plastic chain. For Buster's window-jumping scene, two trainers stood on each side of the low window to protect the pooch when he came through. Special effects opened the window for Buster, even though he seems to push i t open with his paws. And for all of Buster's running sequences, trainers used buzzers to get the dog to follow the sound in the desired direction. Monkey Business A monkey in a cage takes a cup from Stu, sticks his tongue out, and kisses Stu from behind the bars. The mischievous primate then pulls Stu's pants leg. A trainer used verbal commands to get the monkey to achieve the actions. For the pants pulling, the actor lied down on the floor with his leg by the monkey cage while the trainer gave the actor's pants leg to the animal. The trainer instructed the monkey to "pull" and he happily obliged. The two monkeys humping each other on TV was actually stock documentary footage and was not filmed for this movie. Other Animal Action A masked dog pulls on a character's robe. The mask was lightweight and the dog did not mind wearing it. The trainer gave the dog a piece of the robe and cued it to "pull." Also, birds fly and stand on a rooftop. Trainers released 2 dozen homing pigeons for this scene, which returned home soon after.