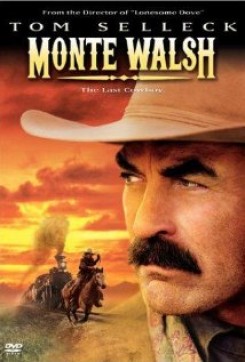 Tom Selleck plays Monte Walsh, a cowboy who is becoming a dying breed. As modern technology takes over, corporations gobble up the open range and begin to make the cowboy an obsolete icon. Monte must make a decision. Should he get another job and stay close to the woman he loves, or should he continue to be a cowboy, looking for what is left of the scarce work he loves and loving what he does.

Anytime gunshots were fired, 1/4 loads were used to minimize percussion and sound with the guns aimed at angles away from the horses. The actors placed ear plugs in their ears and the trainers placed some cotton in the horses' ears to additionally muffle the sound. Rain machines and wind machines with soap flakes were used to simulate the rain and snow storms that were in some scenes. The water temperature was warm and the director even wiped away some raindrops from a horse's face on a brief break between shots. Safety meetings and scene rehearsals were plentiful throughout the filming. All of the actors took riding lessons and experienced stunt riders were used for all stunts and some additional riding. All of the grounds including paths, roads and shallow rivers were inspected and cleared by the trainers for holes, rocks or debris.

Stunt Horses And Their Riders

All of the horses, wranglers and crew members were experienced with western film productions. Several of the horses involved had prior training and experience in performing special stunts. Some horses reared on command while others specialized in jumping and still others were able to make quick sliding stops. All of the grounds were checked before any stunts were attempted and experienced stunt riders were on the horses as wranglers both mounted and on foot.

When mounted cowboys come across a herd of horses grazing in a field, they round the horses up and begin to ride alongside of them, herding them. They approach a train and the conductor blows the whistle sending the herd of horses in another direction. The cowboys watch as the herd takes off. The cowboys, still on horseback, lasso the smoke stack on top of the train and pull it off as the conductor tries to pull away. As a fight ensues with the men aboard the train, some of the riders jump off their horses, while others appear to be pulled off their horses. Shorty, one of the cowboys, shoots at a man from atop his horse, while another man also fights from the saddle.

Twelve wranglers drove the horses into camera range, then the stuntmen that were doubling as the actors, continued to move the horses in the direction of the train. The herd of horses ran as the whistle blew and the mounted wranglers then moved them out of camera view and back to where they were being housed on the set. The train is a real 1913 Montreal Moterworks Engine that moved very slowly as the mounted stunt riders approached. A fake steam engine was constructed and mounted on the train next to the real one. The stuntmen were also experienced with a lasso and roped the fake smoke stack on the top of the slow moving train. As the men pulled on their ropes, the lightweight smoke stack came down off the train, but away from the horses. As the men began to fight, some of the stuntmen performed falls that gave the appearance that they were pulled or shot off the animals. When Shorty fired the gun, it was away from the horse, although the animal had cotton in its ears to help muffle the sound.

Mounted cowboys herd some cattle up and down hillsides, through a shallow river and even rope some by the horns during a herding scene. After the fields were inspected, the mounted trainers released a total of forty longhorn cattle and followed them off camera. The cattle were released in two separate groups of 20 each. Wranglers rode in front of the herd, leading them in the direction they needed to go. The actors and some wranglers, doubling as actors, follow the steer down the hill. Other mounted trainers were waiting at the bottom of the hill in case any cattle decided to roam. The horses, riders and cattle were all accustomed to the herding process. All of them were roping steers and used to being roped by the horns. All of the roping was really done by the experienced wranglers and edited to look as though the actors had accomplished the roping.

Monte rides during a snowstorm holding a young calf in his arms. He brings the calf inside and covers it with a blanket, massages it to keep it warm and later he brings it to a friend's ranch so it can nurse. The actor and the young calf became familiar with each other before the filming began and both were very comfortable with each other. A trainer handed the mounted actor the young calf and he rode very carefully as the fake soap flakes are being blown by an off-screen fan to make it appear as if a snow storm was raging. The actor placed the calf inside a cabin, covered it with a blanket and massaged it. The calf was very comfortable with this. When the calf is seen nursing, it is actually with its real mother.

In one brief scene, the cowboys watch from a distance as Fightin' Joe rides his horse over a cliff. A camera was buried in the ground to get this scene from a dramatic angle. The camera angle made it appear as though the horse jumped higher than it really did. A stunt rider rode a stunt horse at a fast speed and jumped over a pole that was 18" off the ground. The pole was put there to give the horse a visual aid so it knew when to jump. A 20-foot long pit was dug on the other side of the pole for the horse to land in. The pit was 2 feet deep and filled with sand. This helped cushion the jump and also helped with the illusion that the horse and rider jumped off the cliff. This was filmed in front of a green screen and brought to life in post-production.

Monte rides his horse down the middle of the railroad tracks as a train is slowly approaching behind him. He finally moves the horse to the side so the train can pass. The tracks had been covered with wooden boards and then covered up with dirt to assure the horse's footing as it walked down the center of the tracks. There was a train positioned behind them that was started up and moved very slowly. Several wranglers walked in front of the train to guide the conductor, while other wranglers stood off camera supervising the action. As the train neared, the actor turned the horse to the side to move off the tracks and away from the train.

The first time we meet the bucking bronco, two ranch hands are in the corral trying to get the animal to calm down. The saddle falls off the horse as it rears up and one of the men saddles the horse back up, mounts it and rides around the corral until he falls off. This scene was filmed using both actors and stunt riders. The actor was filmed mounting the horse and then riding it slowly around the corral, while the stunt rider rode the horse as it bucked. The stunt man jumped off the horse making it appear as if the horse threw him off. In post-production they edited the scene making it appear as if the actor did all of the riding.

In another scene, Monte dismounts his horse and enters the corral to try to tame the bucking bronco. He takes a jacket from under the horse's halter and covers its' eyes. He very slowly and gently saddles the horse up and mounts it. He then removes the eye cover and they are off. The horse is bucking all over the corral. Horse and rider crash through the wooden fence in slow motion and fall down. The horse and rider get back up, the rider mounts and they are off again. The actor approached the horse standing in the corral calmly as the wrangler stood by off camera. The actor covered the horse's eyes and mounted, riding it about 10 feet as the wrangler held the halter. The wrangler released the halter and the actor turned the horse sharply as the director yelled, "cut." The sharp turn was to simulate the beginning of the bucking sequence. For the next part of the scene, an experienced stunt rider doubled as the actor and the horse bucked and crashed through the fence, made of lightweight, breakable wood. The horse, still bucking, goes right through the glass window of a store. The horse continues bucking in the store knocking shelves and items all over while Monte still appears atop the horse trying to take control.

There were two stunt horses used for these two scenes. One was named Popcorn and the other was named Roxy. Roxy is a bucking horse and was used when the horse appears wild. The other horse, Popcorn, is trained to jump over and into things. Popcorn was used to jump through the window, but was replaced by Roxy who bucked inside the store. The approach to the window was prepared by raising the ground using a deck which was secured and covered with dirt. Sacks of grain were placed below the window. This preparation eased the horse jump through the prop window which was made of balsa wood and fake glass. The wooden shelves and items in the store were made from lightweight balsa wood and all glass items were made out of fake glass. The floor of the building was carpeted with dirt as padding and one wall of the store set was removed so the camera and the horse had lots of room for movement.

In two separate scenes, Monte comes across a couple driving a car that was typical during that period. The first time Monte sees them, they both stop and have a conversation. The car then continues past Monte and the horse. Later, at the end of the film, Monte comes across the same couple in their car, only this time the car is stuck in the mud. Monte begins to leave the couple then turns his horse around and rides fast towards the gate, leaping over it and the car. The actor mounted the horse and rode it down the path stopping to talk to the couple in the car. The car slowly drove by the mounted actor with mounted wranglers off camera nearby. At the end of the film, a stunt rider doubled for the actor and rode the trained jumping horse. The gate was made of lightweight wood that broke apart on impact. This was all filmed in front of a green screen and the car was added into the scene in post-production.

No Animals Were Harmed, Not Even A Fly

After the film is over, you might not even remember a scene from the beginning of the film where a man in a store swats at flies on the counter. There were real flies in the room buzzing about curiously trying to make their film debut, but the flies that the man is shown swatting were rubber and purchased by the production from a local gag shop. After the scene was shot, the real flies were released.