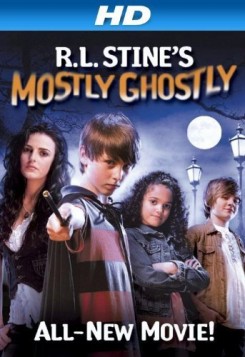 When two young siblings are wondering why they suddenly became ghosts, they ask a boy named Max, the only one who can see them, to help them find out — all while fighting an evil spirit.

When Max (Sterling Beaumon) is in the basement afraid of the ghosts, he picks up his dog Buster, holds him for a moment, and then sets him back down on the floor. The room was an enclosed, secured set and a well-trained dog named Moe played the role of Buster. Before filming began, the actor was introduced to the dog and instructed how to properly handle him. The trainer hid off-camera and then retrieved the dog after he was placed on the ground.

When Max takes his hat off during a magic trick, a bird flies out and into his arms. He "tosses" it up, and it flies across the room to the dresser. This scene was filmed in separate shots. A trained pigeon was used for this scene, and the actor was well-rehearsed and instructed on how to handle the pigeon. Trainers cued the bird, which had a monofilament line tied to the band on its leg, to fly to the top of the dresser. Only one take was performed for this portion of the scene. For the portion of the scene in which the bird exits the hat, trainers placed the pigeon (still attached to a monofilament line) in the hat and gently wriggled the hat to encourage the bird to fly out.

Due to limited resources and/or late notification, American Humane did not monitor some of the dog and bird action or any of the cockroach and rat action.