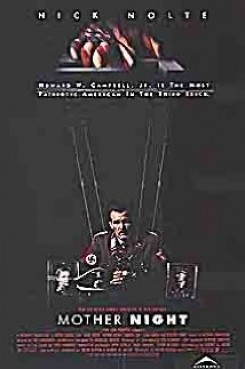 Mother Night is a film about Howard W Campbell Jr., an American who lived in Berlin during W.W.II. Howard was an American spy. He had a nightly radio broadcast that aired from Berlin where he read coded messages which revealed German secrets to American officials. Only three people knew that he was an American spy and not a German sympathizer. After the war, Howard was given a fake identity and relocated to New York. Years later, after trusting a friend with his story, his identity was uncovered and the Israeli government found out that he was alive. They wanted him brought to Israel to be prosecuted. To the Jewish people, Howard, through his nightly broadcast, influenced the German public that the Jews were an inferior race, which resulted in thousands of murdered Jews. After weeks of hiding, Howard eventually turns himself over to a neighbor, a holocaust survivor, who calls the Israeli officials. The day before his trial, serving his country to the end, he hangs himself, taking the knowledge of the secret spy operation to his grave.

Animal action consists of four horses hitched to two carts in front of a country home. There is also a short scene of an ox hitched to a car. The ox was pulling the car down the road with three men inside. The ox and car were actually going a short distance down hill. The ox and horses were owned by a local resident and were cared for by their owners. A dog is also seen lying on a couch while a little girl strokes his head. The dog was the pet of the local veterinarian.