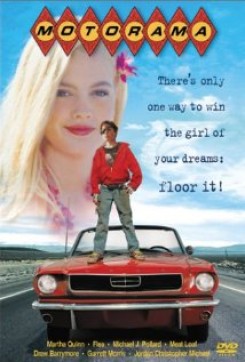 This very bizarre story is about ten-year-old Gus who runs away from his unhappy home life. He steals a car and starts driving through the country side. In his travels he stops at a gas station where he is given a small game piece with a letter on it. These game pieces, given out by all participating gas stations, must spell out the word Motorama. By aquiring all of the letters he will win five hundred million dollars. The movie takes us through his various and violent encounters to gain the needed game pieces.

There are several animal scenes in the picture. When Gus rents a room for the night he meets a very creepy motel manager. Gus walks over to the man's truck to talk with him and we see what looks like a stiff dead animal under a blanket in the back of his truck. This was a prop taxidermied animal. When Gus races away from the motel, he must slam on his brakes in order to avoid running over a squirrel in the road. This scene was shot in cuts. At no time was the squirrel in any danger. The close up shot where the squirrel appears to be "suprised" was stock footage. In another scene while Gus is daydreaming, he walks onto the beach and looks down to see that his feet and the sand are covered with sand crabs. The sand crabs were placed on and around the boy's feet by wranglers for this short shot. In the scene when Gus pulls into a run-down restaurant to get a bite to eat, there is a pig teathered to a pole out in front of the building. The pig is covered with numerous tatoos. The "tatoos" were actually water soluble decals that were placed on the pig. Other animals seen are two wild horses standing in the road and a dog as background only. The horse scene was an un-planned, impromptu shot taken by one of the crew members as he was leaving the set at the day's end. Also, a dog was in one scene as back ground only.