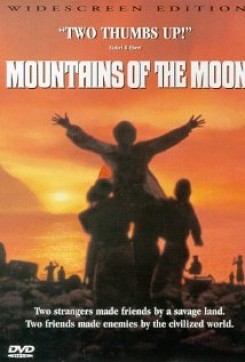 Mountains of the Moon

The story of Captain Richard Francis Burton's and Lt. John Hanning Speke's expedition to find the source of the Nile river in the name of Queen Victoria's British Empire. The film tells the story of their meeting, their friendship emerging amidst hardship, and then dissolving after their journey.

Reports state that a steer was bled to death during the production of this film, earning an Unacceptable rating from AHA. The ongoing expansion of the AHA Guidelines for the Safe Use of Animals in Filmed Media has raised the standard of care for animal actors worldwide. In addition, technological advancements have created safe alternatives to risky action, enabling filmmakers to maintain their creative vision without compromising the welfare of animal actors. AHA continues to be a vigilant watchdog for animals in film and television and acknowledges the groundbreaking history of this program while expanding and refining procedures to reflect increased knowledge and new challenges.