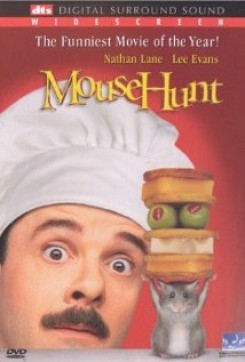 Mouse Hunt is a film about two brothers Lars & Ernie, and their attempts to renovate a dilapidated mansion left to them by their father. The present tenant, a mouse, does not appreciate his domain being invaded and so it sabotages every attempt the men make at sprucing up the place, finally destroying the house and driving the men close to insanity.

A mouse is used throughout the film. It performs several behavioral stunts such as, pushing an olive into its mouse hole, traveling from point A to B across the floor, across a table, sliding a book of matches across a surface, climbing up a cord, running up a chimney, across a counter and onto a can, crawling up a rope and chewing on it, scurrying up an apron, etc. All of the above stunts were pre-conditioned prior to the scene and the animal was cued with verbal commands, food prompting and rewards. This form of behavior and training were also added with computer-generated effects and blue screen filming. There were several mice used to play the one animal actor. No one mouse was used for more than a few takes at a time.

Ernie attempts to pour himself a bowl of cereal and the mouse tumbles out of the box and into the bowl. Ernie screams and the mouse grabs a cheerio and runs out of the room. Ernie and Lars chase the mouse with a broom and meat cleaver until the mouse successfully makes it into his mouse hole. This scene was shot in cuts. The trainer placed the mouse in a specially rigged box and filled the cereal bowl with cereal to cushion the landing. The actor gently poured the mouse from the box into the bowl. For the chase portion of the scene, trainer #1 released the mouse and used a blow dryer, on a low cool setting, to get it to move from point A to B where trainer #2 waited with a food reward. During the majority of the chase scene the mouse is not present in the shot.

In another scene, the mouse is on top of a large piece of cheese rolling it away as it pushes against it. It leaps when the missing wedge cut comes around. This scene was shot in cuts. A large fake cheese wheel was attached to a roller on its side. The camera was placed next to the cheese. The trainer put the mouse on the wheel and rotated the cheese wheel slowly. The trainer retrieved the mouse at the completion of the shot and gave the mouse a food reward.

The mouse, with a full belly, goes through the wall past dust balls, over paint chips and under cables to his room and climbs into bed. He pulls the covers over his body and goes to sleep. The mouse wakes to find nails crashing through the walls into his domain, completely destroying his bed. He attempts to run when a nail comes through the wall, sending debris everywhere. He runs through the wall as the nails continue to come crashing throng, one nail just missing him as it stops inches from his face. This scene was shot in several cuts using a real and an animatronic mouse. The mouse was pre-trained prior to this scene. For the portion of the mouse running through the walls to his bed, trainer #1 released the mouse and cued it with a verbal command and it ran to trainer #2 where its box and a food reward waited. The mouse and nails were shot separately. The shots were inserted during post-production to look as if they were happening at the same time. The debris seen around the mouse's bed was bits of paper and Styrofoam. An animatronic mouse was used for the scenes where the mouse climbs into bed and pulls the covers up and when it hears a noise and sits up in bed. The animatronic mouse was also used when the mouse is pinned to the wall by the nails and for the horrified looks on its face.

In another scene, the mouse pokes its head out of its hole and sees traps covering the floor from his hole to the counter. He makes a mad dash across the floor winding around all of the traps, missing every one. The rodent scampers up an apron; through a cheese grater, across a rolling pin, jumps up to a coffee grinder, and climbs up another cord. The mouse walks from point A to B and jumps down to a carpeted surface. Then he grabs a lamp cord and swings over to another shelf and pulls himself up and runs through a paper towel roll. This scene was shot in several cuts. Several mice were patterned to run this course. The mousetraps were wired shut so that they would not accidentally go off. The shot of the mouse swinging on the lamp cord was accomplished through computer generated special effects.

When the guys are seen chasing the mouse with a vacuum cleaner, the mouse was actually filmed before a blue screen and later the shot was inserted with the background during post-production.

Lars and Ernie decide to go to the Animal Shelter and get themselves a cat. There are several cats and kittens in cages as the two men walk through the room trying to find the correct one. The shelter person, in a chemical weapons suit, comes out of a gas room where he apparently has attempted to gas "Catzilla". He takes the crate and puts it down and supposedly sticks an electric prod into the box. The cat sounds vicious and so the guys decide to take him. One of them drops the crate outside the car and the box starts jumping around. Upon arriving at home, the cat is heard hissing and the box is seen jumping around on the floor. The trainer handled all of the cats and kittens that were used for background atmosphere. At no time were any cats near the liquid used to simulate poison.

During the chase scene between the cat and mouse, the two animals were filmed separately. This scene was shot in several cuts. Trainer #1 released the mouse and trainer #2 cued it to the awaiting box and gave it a food reward. Then the cat was released by another trainer and cued with verbal commands and a buzzer from point A to point B where its holding cage was placed. This procedure was repeated for every shot of the chase scene. Both animals were pre- conditioned for their stunts prior to filming. All falling objects were strategically released after the animals cleared the area.

Lars and Ernie turn to a professional exterminator to help rid them of their rodent. The mouse runs from A to B across a table and turns on a radio. This scene was shot in cuts. Two mice were used for this shot and both were conditioned prior to shooting. Trainer #1 released the mouse and it ran over to the knob on the radio and placed its front feet and body weight on the device, simulating turning the knob. Trainer #2 was behind the wall moving the knob.

Later, the mouse is outside at the exterminator's van and he activates a cable on the front of the vehicle, pulling the cable through the walls of the house. The mouse attaches the end of the cable to the exterminators pack on his back. Earlier, the mouse had chewed a hole in the wire to the exterminator's video monitor. When he gets it fixed the mouse is on the screen standing on the recoil lever at the truck. The mouse walks up the lever and his weight causes the mechanism to release, which causes the spool to recoil the cable, pulling the man through walls and flooring until he ends up at the truck. The mouse runs down the man's body and back into the house. This scene was shot in several cuts. The trainer placed the mouse on its mark at point A and cued it to point B where his box waited with a food reward. When the mouse is sitting on the cable, the trainer placed it on its mark and then retrieved it at completion of the shot. When the mouse is running down the exterminator's body, it was actually moving across the trainer's body. The cable was never actually moving when the mouse was present. Some shots were inserted with the background during post production.

There is a scene where Ernie and Lars chase the mouse with a shotgun.

This scene was shot in cuts on a split blue screen and inserted with the background during post production. Trainer #1 released the mouse and the blow dryer on a cool setting was used to prompt the mouse to run to point B to another box containing a food reward.

When the mouse is seen in the coffee can, trainer #1 was lying under the floor and fed the mouse through a hole below the can. The mouse exited through the opposite hole in the can and ran from point A to B through the mans legs to

its holding box where a food reward waited. The firing of the gun was filmed separately from the mouse and the smoke from the blast was added later.

During the auction, just inches from Ernie's face, the mouse crawls through a hole, at the podium and winks at him. The mouse grabs Ernie's deceased fathers lucky string, and, to his horror, the rodent eats it. The trainer, from under the podium, holds the mouse and lets it emerge through the hole just enough to get the shot.

Moments later the mouse is seen in a woman's hair in the audience. The hair was fake and contained wire which, was attached to a wooden spool. The trainer placed the mouse on the hair and it slowly moved down the spool and into the woman's cleavage. The mouse, on the floor runs past the audience and into the hole in the foyer with Ernie in hot pursuit holding a hose. The actor was apprised prior to the scene not to make any sudden movement. The trainer retrieved the mouse at completion of the shot.

When Ernie puts the hose inside the hole and turns the water on, the house begins to fill with water. The mouse frantically trys to out run an oncoming wave of water as he makes his escape. He finds a cup and rides out the wave of water. For this scene, a real and an animatronic mouse were used. Trainer #1 released the mouse at point A and cued it with verbal commands to go to point B where trainer #2 was waiting with its cage. The mouse ran to its cage and was rewarded with food. An animatronic mouse was used when the wave is seen crashing after the animal. For the portion of the mouse riding in the cup, a Styrofoam cup was mounted to a wheeled rig, which was pulled through the water using monofilament. The trainer placed the mouse in the cup and retrieved it after completion of the shot.

The following shots of the mouse were computer generated or achieved through special effects: the mouse being hit by an orange, the mouse with pieces of cheese balanced on its head, the mouse clinging to the drain pipe, or hiding inside the piano, clinging to the tail pipe of a car, falling over backwards with a look of horror on its face (upon seeing "Catzilla"), and jumping across the chasm just as the water reaches him, etc.

Other animal action consists of roaches (both real and fake), were used in a restaurant, some birds outside of a church in the rain, and a dead fish in a restaurant kitchen.