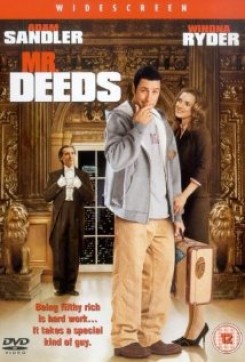 Adam Sandler plays Mr. Deeds, a small-town guy who inherits controlling interest in his dead uncle's massive media corporation. The new billionaire attracts the attention of a big city tabloid TV reporter played by Winona Ryder, who is sent undercover to write a shady tell-all but falls in love instead.

Good Samaritan Mr. Deeds saves cats trapped in a burning building by tossing them out the window. Unfortunately, a safe landing is not in the cards for some, as they bounce off the firemen's awaiting trampoline down below and end up in various places. Fifteen real cats and fake "stunt stuffies" were used throughout this sequence. For most of the scene, the real cats wore custom-made harnesses that were fitted for comfort and security. However, fake cats were used for the tossing sequences, while the trampoline action was performed by real felines. One trainer stood on a platform and held a harnessed cat a few feet above the trampoline and let it go. The cat gently bounced and then jumped up to another trainer waiting on a second platform. All areas were padded for the safety of the cats.

One bouncing cat ends up in a nearby cake. A trainer held a cat 6 inches above a cake and then dropped the cat onto the soft cake. One cat ends up in a dog's mouth. A fake stuffy cat was thrown to the dog, Kep, a Border Collie. Another kitty goes down a manhole. For this, a trainer dropped a cat a few feet down a fake manhole to another trainer. When a kitty falls into the sunroof of a car, a stuffy cat was tossed into the car while the actors were filmed holding a live cat. For the cat that gets tangled in a man's Afro, a trainer stood on a ladder holding a cat and dropped it a few feet below onto a man's wig. A cat also bounces onto the sidewalk by a homeless man. A trainer stood at the foot of the actor and dropped the feline about 2 1/2 feet. One cat is flaming as it is tossed out the window and it lands in a fireman's water bucket on the street below. The flaming kitty was computer-generated. When it emerges from the bucket, a trainer misted a real feline with water and gently placed it inside the bucket. All cats were rewarded with food treats and plenty of affection.

A herd of sheep and several cows run across a pasture as a helicopter flies overhead. For this scene, trainers stood off-camera directing the animals as they ran in the enclosed pasture.

So Hard to Say Goodbye A cow stands among the town-folk that gather around the helicopter to say goodbye to Deeds. A trainer doubled as an actor in the crowd and kept the animal at his side. Later, a man opens a curtain covering the door of the helicopter and tosses a chicken to the ground. A trainer handed the chicken to the actor who gently tossed the chicken to a trainer, who was below camera frame. The chicken was trained to respond to a clicker sound by flapping its wings.

In one scene, a dog rides in the bed of a pickup truck and the truck stops abruptly. A trainer doubling as an actor held onto the dog as they prepared to stop. Later, the dog hangs out at the pizza parlour with its paws up on a table bench. A trainer placed the dog on its mark and verbally cued it to stay from off-camera.

All of the mounted animal trophies that appeared on the walls were props. The ram that appears briefly in one scene is stock footage.