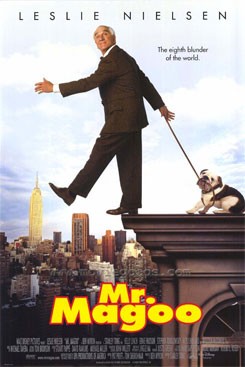 Mr. Magoo is a live action film based on the cartoon character "Magoo", a wealthy, half blind man who, in this instance, unwittingly places himself at the scene of the theft of the Star of Kuristan.

In the opening sequence, Angus, Magoo's dog, gets out of bed, proceeds to a doggy urinal and stands in front of it, relieving himself. He goes to Magoo's bedroom and carefully places Magoo's clothes on the bed. To wake up Magoo, Angus jumps onto the bed with a dinner bell in his mouth and shakes his head, ringing the bell.

There is a scene where Magoo and Angus go out on his boat and Magoo unknowingly encounters the thieves traveling on the ferry. When Magoo hooks one of the thieves with his fishing pole, the man is tossed into the water. Upon seeing Magoo, the thief swims towards the small boat with a knife in his mouth. When Angus sees the thief he starts barking. Then Magoo decides to go ashore and Angus jumps from the boat to the dock. This scene was shot in cuts. The dog was wearing a life jacket at all times and divers were always in the water in case he fell overboard. When the boat was in motion, the dog was sitting on the seat next to Magoo wearing a harness and cord tied to it so it couldn't leap off the seat and onto the bough. The trainers cued the dog with verbal and hand signals for all of the barking and A to B movements.

There is a scene at Magoo's mansion where Angus is sitting on the piano bench while Magoo plays. Playing catch with Angus, Magoo picks up the Star of Kuristan, which he believes is a ball, and tosses it across the room. The dog jumps from the bench, runs and jumps onto the ottoman. It slides across the floor and into the closet, knocking over Magoo's fishing tackle. The dog is heard whining from behind the closed closet door. Later, Angus is once again on the piano bench with the jewel in his mouth. This scene was shot in cuts. The trainer placed the dog on its mark and cued it with verbal and hand commands.

Magoo throws the jewel and it lands in a hedge outside. Angus runs A to B and stretches on his hind legs to reach the jewel, before trotting back into the house with it in his mouth. He enters through his doggie door and jumps onto a stool at the breakfast bar and drops the stone onto the counter. Once again, Magoo throws the stone outside and Angus runs through his doggie door and outside to fetch it. This scene was shot in cuts. The trainer placed the dog on its mark and cued it with verbal and hand commands with a food reward.

There is a scene where Angus falls off of a stationary skimobile and lands on his back with his paws in the air. Later Waldo and Angus are riding a skimobile in hot pursuit of the thieves. This scene was shot in cuts. The trainer placed the dog on the snowmobile with a "sit-stay" command. The dog was securely positioned on the snowmobile with a tie down and had been prepped to ride on a snowmobile prior to the scene.

At the thieves' den, Angus attempts to save Magoo from falling by pulling on a rope tied to his master. The trainer placed the dog on his mark and cued him with verbal commands.

Later, at the airport, Luanne, the female thief, is dressed as an old woman. Angus spots her and grabs her handbag tugging on it. This scene was shot in cuts. The trainer released the dog and cued it with verbal and hand commands.

Three dogs were used to act out the role of the one animal. There are many scenes of the dog running from A to B with the jewel in his mouth, running through his doggie door, jumping onto or off of a stool, chair, steps, etc. All of these behaviors were accomplished with verbal and hand commands with food as a reward.

Blanks or caps were used whenever shooting took place around the dog. During the car chase, the dog was placed in a baby-seat with special straps attached for the animal. The vehicle was in a parking lot and never moved. The stunt crew rocked the vehicle back and forth to simulate the movement. In many scenes the trainer doubled as the actor.

Other animal action consists of both a real baboon and a man dressed in a baboon suit. During the chase scene, some pigeons fly into the air as the eggplant auto approaches. On one side, trainer #1 released the birds while on the other side; trainer #2 with receiving cages retrieved them. There are also a few scenes of guard dogs being walked on leashes.