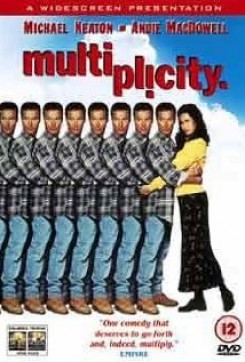 Multiplicity is a comedy about Doug who has too much to do and not enough time in the day to do it in. At one of his job sites, he meets a geneticist who offers to clone him. At first Doug is skeptical, but soon realizes if cloning actually works, he would be able to get twice as much done, so he does it. Everything about Doug #2 is the same as the original Doug, however once they leave the doctors office, their experiences are completely different. The original Doug doesn't tell anyone about the cloning, not even his wife and kids, so Doug #2 has to live in the guest house above the garage. After being a housewife for many years, Doug's wife Laura decides to go back to work. With Doug #2 doing all the work at the office, Doug now has extra time to help with the kids. However after a month, he is tired of being a housedad so he gets cloned again. Doug #3 has the feminine personality of the original Doug. He is the one who stays home and takes care of the house and kids, while Doug #2 continues working and Doug #1 goes to sports events and even learns how to sail. Doug #1 goes sailing one day and he returns to find another clone. Doug #2 and Doug #3 decided they needed another Doug to help them out. However since he was made from a copy instead of the original, Doug #4 is mentally challenged. Soon Doug's life is in complete chaos. There are just too many Dougs. Laura, not knowing about the clones, doesn't understand her husband's sudden changes. She takes the kids and leaves him. After Laura leaves, Doug realizes that he has to take responsibility for his own life and no one, not even a clone, can do everything. Doug does get Laura and the kids back. The three clones drive off leaving him exactly where he was, living a stressful, yet normal life.

When Doug returns from a sailing lesson, a Golden Retriever is seen lying on the dock next to the owner of the sailboats. For this scene the trainer placed the dog next to the actor and used verbal commands to cue the dog to stay. Later, when he decides to go sailing again, the dog is seen aboard the boat as he sails out into the ocean for a relaxing getaway. Doug doesn't have the stomach for sailing, and he throws up. While he is vomiting, the dog stands next to him, as if consoling him. When the dog is seen on the boat, the trainer was off screen at all times, either to the side of the dog or under the dog in the galley. For a safety precaution, a three wire high fence was constructed between the railing and the deck of the boat so the dog could not jump or fall off. The trainer placed the dog next to the actor and again used verbal commands to cue the dog to stay. In another scene, while Doug is working on a construction site at the Gemini Institute, there are rabbits at the lab seen sitting in cages in the background. The trainer had placed two to three rabbits in each cage. The rabbits merely rested in their cages. In the beginning of the film, Doug drives by in his truck and four dogs are seen being walked across the street as two policemen and two assistants stopped traffic. The dogs were on heavy leashes being held by the actor on each arm. When action was called, the trainers were behind the camera and they simply called the dogs.