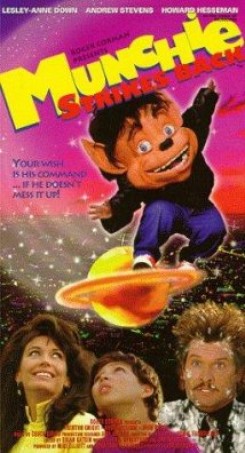 Munchie Strikes Back is the second sequel to the original film. As we may remember, Munchie is an elf-like creature sent from his astral planet Eros to help those in need. When we last saw Munchie, he had just returned to his planet, where Eromus, Master of Time and Space. had called for him to be exiled to planet Eros Minor, as a result of loud and destructive parties on Earth. However, Munchie is given one more chance to redeem himself. Enter our family in need of assistance; recently widowed Linda McClelland and her son Chris. Linda works for obnoxious Shelby Carlisle, the most powerful man in town. When he sexually harassed Linda, she refused to be treated as one of his "bimbos", so he handed her a "Pink Slip", terminating her immediately. When Linda arrives at home, she finds her troubles are only beginning. In the mail is a notice from her mortgage company that her final balloon mortgage payment is due immediately, or she will loose her home. Her late husband had always taken care of their finances, so she is completely surprised, as well as worried by this latest problem. To add insult to injury, her son Chris arrives home, rejected by his Little League girl friend for the star pitcher of their team. Then they learn that the first team they will play this season is coached by none other than Shelby Carlisle with his equally obnoxious son as star player. Munchie is sent to the rescue.

Animal action is minimal. In one scene a French Poodle, named "Killer", comes scampering toward the McClelland's front yard yelping at Linda's feet. His owner, Poindexter from next door, attempts to quiet him but "Killer" ignores the command and continues yipping and yammering At this point, Linda gently but firmly nudges him out of the scene. Later, Carlisle pushes a power mower through the hedges directly into Poindexter's property. As the lawn mower moves left to right, there's a startled cry from the unseen poodle as tufts of white fur go flying up in all directions. In reality, the dog was not on set when this action was filmed. In another scene, Carlisle spins around to confront a voice, only to find a large, black Raven perched on the sculptured bust of a Greek Goddess.