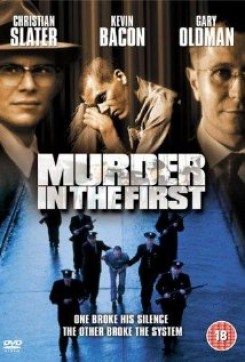 Murder In the First

Murder in the First is a prison film based on the true story of Henry Young and chronicles the historic case that prompted the Supreme Court to rule that the use of solitary confinement in prisons is inhumane. When three prisoners attempt an escape from Alcatraz prison in 1938, one is killed, one becomes an informer and the third, Henry Young, is thrown into solitary confinement as the ring leader of the attempt. There are scenes showing the graphic depiction of the brutal treatment of Henry at the hands of the prison guards and the associate warden, Milton Glen. Alcatraz becomes famous as an inescapable prison and the authorities believe that Henry must be made an example to the other prisoners. In a sequence of scenes, we see the beatings and filthy conditions which are the signature of time spent in solitary or the "dungeon", as it is known by the inmates.

In one of these scenes, Henry is given food in his filthy dark cell. A spider crawls to the food and Henry gently places some food in front of it, as if the spider is a cellmate. For this scene, the spider merely crawls on the ledge near the plate. In another scene, Henry lies naked and filthy in the damp darkness, nearly unconscious. A rat is seen crawling on his leg and he kicks the rat away. For this scene both a live and a fake rat are used. Much of Henry's story in the beginning of the film is told in voice over by his attorney, James Stamphill. After a scene in which Warden Glen severs Henry's Achilles tendon with a straight razor, crippling him for life, we see Henry's head being shaved, readying him to re-enter the prison mainstream. There is a scene in which the head warden, Mr. Humsen, makes a cursory visit to Alcatraz and ends Henry's confinement to solitary. It is 1941 and Henry has suffered three years in the dungeon. The normal sentence is nineteen days. This scene between the two wardens takes place in Warden Glen's office on Alcatraz where he keeps his two pet birds in a cage. Once out of the dungeon, Henry is unable to cope with prison interaction. Another prisoner points out the man who not only tried to escape with Henry, but who later told the warden that it was Henry who masterminded the plan. In a moment of semi-comotose vengeance, Henry stabs the man with a spoon and kills him. For this he is charged with murder in the first degree. James Stamphill is an inexperienced lawyer assigned to the Young case. It is assumed by his superiors that the case is cut and dry and Henry will obviously receive the death penalty. However, when Stamphill interviews Henry, he finds him non-verbal, frightened, catatonic and animal-like. From this point on in the film we begin to learn the entire history of Henry Young and watch a friendship unfold between Henry and Stamphill. Finding that Henry was originally jailed for stealing five dollars to feed himself and his orphaned sister, Stamphill starts to construct a case revolving around the fact that it was the system which was ultimately responsible for the murder and that Henry was actually the unwitting weapon. The cruelty and unjust treatment of Henry in solitary confinement transformed a petty thief into a killer by depriving him of basic human needs, such as light, cleanliness, exercise and human interaction. Henry has no memory of killing the other prisoner nor can he remember his own age. The inhumane realities of his brutal treatment in solitary are brought to light and eventually he is found guilty of only involuntary manslaughter. The wardens are found guilty of crimes to humanity and although Henry dies in his cell before his case can be appealed, the Supreme Court finally decides that solitary confinement is inhumane treatment of a human being.