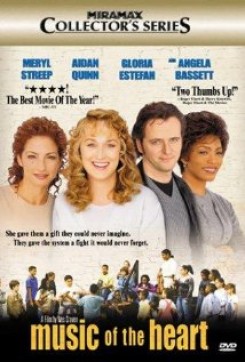 Music of the Heart

Music of the Heart is the true story of the remarkable East Harlem elementary school teacher, Roberta Guaspari. During the last ten years, she has taught over fourteen hundred under-privilidged children to not only play the violin, but to believe in themselves when no one else had the courage to do so.

AHA is the oldest humane organization in the United States with the unique mission to advocate for both children and animals. In this film, there are moments that will tug at the heartstrings of those who love both. Pulling at animal lovers' heartstrings is an adorable little puppy that is adopted by Roberta and her children and named Allegra. Several Cairn Terriers that ranged in age from 8 weeks old to 9 years old were used to play Allegra. When filming began three three-month old pups were used. By the end of filming one of the lead pups, Stinky, was a whopping 5 months old. Since the breed has such a small stature, a nine year old terrier mix named Sam also was able to play Allegra. His maturity enabled him to be trained to do the more complicated behaviors such as looking in a particular direction, holding longer sit stays and barking on command. Sam, the music lover, is seen sitting under a piano as music is played. Questions or Suggestions musicofmyheart@ahafilm.org