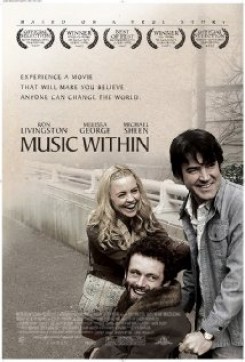 The true story of Richard Pimentel, a brilliant public speaker with a troubled past, who returns from Vietnam severely hearing -impaired and finds a new purpose in his landmark efforts on the behalf of Americans with disabilities.

Young Richard, played by Ridge Canipe, picks up a chicken from a nearby counter and puts it inside a large galvanized garbage can. He then picks up a knife, and it appears as though he kills the unseen chicken he has just put inside the can. A trainer instructed the young actor on the handling of the bird prior to the scene, and the action was filmed in two separate shots. First, the trainer placed the chicken on the counter just before filming began and stood off-camera to supervise as Canipe gently picked up the bird and placed it inside the trash can. Filming then stopped and the trainer removed the chicken from the set. For the subsequent take, the actor pantomimed his stabbing gestures into the now empty garbage can. Production provided documentation that the poultry that hangs in a shop window was fake. In another brief scene, as Richard (Ron Livingston) walks through a hotel lobby, he passes a guide dog lying near its blind companion. A trainer placed the dog on the floor, who stood just off-camera while the scene was filmed.