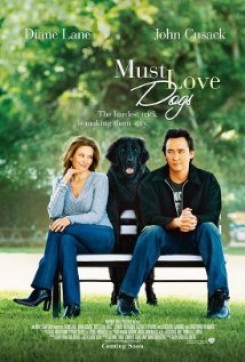 In this adaptation of Claire Cook's best-selling novel, divorced pre-school teacher Sarah Nolan (Diane Lane) finds herself making hilarious, often painful attempts to find love again. Chock full of good intentions, sisters Carol and Christine post Sarah's profile on an Internet dating site, with the caveat that prospective suitors "must love dogs." A slew of disastrous first dates eventually leads to a somewhat promising encounter with Jake Anderson, a custom boat builder played by John Cusack. But a growing flirtation with the single father of one of her students really makes waves on Sarah's romantic horizon.

Two six-month-old Newfoundland puppies alternated for the role of Mother Theresa, Sarah's canine companion. Most of the action was accomplished by Molly while her sister Mabel, now called Maeve, performed in a water scene.

Sarah brings Mother Theresa to meet Jake for their first blind date at a dog park. Jake, meanwhile, borrowed a friend's West Highland White Terrier for the occasion. Mother Theresa hides under the park bench when Jake comes over and shows off Bruno's ability to play dead. For this action, the trainer first cued Molly onto the bench and put her in a down-stay position with her head on the actress's lap. Later, the handler directed Molly to go under the bench and lie down. Another trainer placed Bruno in a sit-stay and verbally cued the Westie from off-camera to flop over and lie still as the actor delivered his dialog.

To create the typical ambiance of a dog park, several trainers – some on camera – were used to call dogs back and forth and throw balls. The dogs were prepped to play together, and all props were checked out and approved by American Humane's Certified Animal Safety Representative monitoring the production. As a precaution, the park gates were closed to eliminate the possibility of escape. Deep in the background, two fly fishermen fish in a pond. Although they had real gear and tackle, there were no hooks on the lines.

The Newfoundland breed is renowned for its swimming ability, so the action in this scene presented little technical difficulty for Mabel. The trainer waded into the three- to four-feet water and supported the Newf's body until it was time to film. He then cued Mabel to swim 15 feet and put her front paws on Jake's boat, which was secured and stabilized by the camera barge. To help Jake heave the sopping Newfie aboard, Mabel wore a black harness camouflaged by her coat that the actor could grab onto to pull her into the boat.

This scene was shot on a warm day, and trainers dried off Mabel when she returned to shore. Certified Animal Safety Representatives made sure the dog was kept in the shade between takes to prevent overheating, and verified that the water in the lake was clear and free of debris. There was ample rest time for the dog between takes, and trainers shaded Mabel with an umbrella to prevent any overheating.

American Humane monitored a scene with Mother Theresa riding in a convertible with Sarah. Though this action was cut from the theatrical release, it may resurface in additional footage on the DVD. Trainers situated the Newfie in the passenger seat and rode on the camera car in front of the dog. Molly was well-prepped for the action and the car's windows were rolled up for safety.

Mother Theresa and Sarah watch a television program featuring working Newfoundlands in one scene. This stock footage came from an episode of the show Dogs with Jobs.