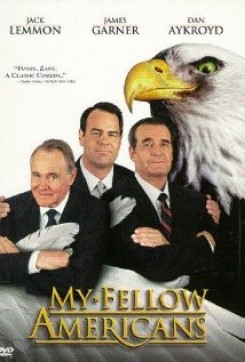 My Fellow Americans is a film about President Bill Haney and the scandal involving kickbacks he received before taking office. Haney knows that if the public found out about it, he would be finished, so he gives orders to his men to frame former President Russell Kramer. Kramer was in office at the time of the scandal. Another, former President Matt Douglas, the president Haney defeated for office, is determined to find out exactly who is responsible because he plans to run for office again. Through a series of unfortunate events, Kramer and Douglas find themselves running from the National Security Agency in order to stay alive. These two men, once great adversaries, find themselves needing each other to survive and to prove Kramer's innocence. After obtaining the necessary information to clear Kramer, they must expose President Haney. The two compadres travel to the white house however, the presidents men are on the look out for them and Kramer and Douglas find it very difficult to reach their objective. Nonetheless, they are successful and Kramer is cleared of all possible charges.

When Kramer and Douglas are trying to reach the president on the South lawn, they steal two police horses and are seen galloping across the grounds. In their pursuit, the two men are seen jumping a small fence rail. This scene was shot in cuts. For the majority of the scene, expert riders wearing masks of the actor's image were used. The actors were used for close up shots and brief A to B segments. Other animal action consists of an owl seen flapping his wings and hooting as if he just landed on the tree branch. In another scene a dog is seen on a leash and some ducks are seen in the water at the reflecting pool in front of the Washington monument. There is a scene where a gunshot is heard and some birds on the lawn get spooked and fly away.