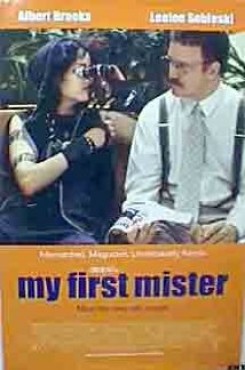 Jennifer (Leelee Sobieski) takes a job at an upscale boutique after she graduates from high school. Jennifer and her new boss, Randall (Albert Brooks) eventually become good friends and even though Randall is much older than she is, Jennifer develops a crush on him.

My First Dogs Two adorable Pugs wearing scarves around their necks greet Jennifer and her mom at the door of their home. Mom bends down and pets one of the dogs as the other Pug stands nearby. In a later scene, the same two dogs sit with a woman outside of Jennifer's bedroom door. One of the dogs exits. For their scenes, the trainer placed the loose-fitting and lightweight scarves on the dogs and placed them on their marks. The trainer stood off-camera and used hand signals to get the dogs to achieve the action. After the scenes were filmed, the dogs were retrieved by the trainer and rewarded with a treat. In a brief scene, Randall lies in the middle of the street while a dog stands next to him and barks. After the street was cleared of all traffic, the trainer put the dog on its mark and from off-camera cued the dog to "stay" and bark. My First Cat In two different scenes, Jennifer's cat, Black, lies on the floor. Jennifer reaches down and picks the cat up in one scene while in the other she reaches down and pets it. The trainer set Black on its mark and the actress gently reached down to either pet the cat or pick it up. The cat and the actress were introduced to each other before filming and took an instant liking one another.