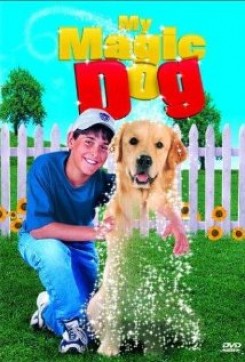 My Ghost Dog is about a dog who dies and comes back as a ghost to help his young owner find a lost document.

A Golden Retriever is seen throughout the film walking from A to B, sitting next to an actor, lying on a bed, traveling up or down a stairway, playing ball, eating a dog biscuit or a piece of pepperoni etc. For all of the above behavioral stunts, the trainer placed the dog on his mark and cued him with verbal and hand commands. When Lucky, the dog, hears the burglars in the house, he jumps down from his owner Toby's bed, and chases them through the house. As the burglars are leaving through the back door, Lucky grabs the pant leg of one, ripping a piece off. Then he proceeds to chase them around the corner where a yelp is heard. When Toby rounds the corner, he finds a dying Lucky in the road. This scene was shot in cuts. The trainer released the dog and he ran from point A to B. When the dog is seen lying in the road supposedly dying, the trainer placed it on a "down stay". As Tobby holds the dying dog, it licks the boys face. For this shot, baby food was applied to the actor's face and the trainer gave a verbal command to "kiss boy". Other animal action consists of a bird in a cage and a Golden Retriever puppy being given to Toby. American Humane was present on set to monitor the animal action.