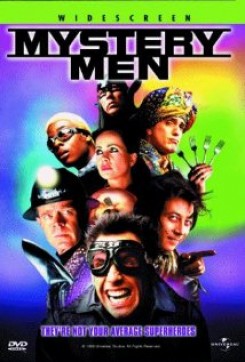 Mystery Men is a comedy based on the comic book "Mystery Men" about a group of wannabe heroes who must defend their city against the villainous Casanova Frankenstein.

What does a super-hero's pet do?

The super hero's family dog basically sits around the house. For all of the scenes the trainer placed the dog on its mark and cued it with verbal and hand commands.

How does a super-hero handle a skunk in the woods?

Heroically? Spleen, one of the heroes encounters a skunk that waddles over to Spleen's leg and starts to hump it. For this scene, several different methods were used to accomplish this behavior. Flowers, champagne and music? Wrong. Cat food applied to a real and fake pant leg encouraged the skunk to appear amorous. One trainer released the skunk from its carrier and a second trainer used verbal commands to cue it to the pant leg.

Cameo appearances by other animals include… A goat standing in line to audition for super hero status, ducks in the background at a camp area, and a rooster standing on top of a refrigerator.