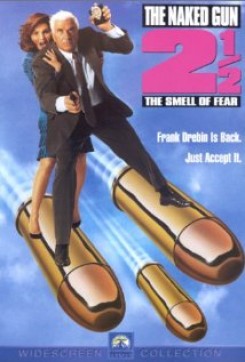 This zany sequel begins with our hero, Lieutenant Frank Drebin, wreaking hilarious havoc at a White House dinner. He's in Washington on a special mission to assist the local police. Representatives of various energy interests such as nuclear, coal, and oil are meeting with President Bush to help formulate a national energy policy. The President has appointed Dr. Albert Meinheimer as his top advisor and will base his energy policy solely on Dr. Meinheimer's recommendations. When a bomb explodes at the Meinheimer Research Institute, Frank investigates and is surprised to find the director of public relations for the institute is none other than Jane, his old flame. It's immediately clear a few sparks of their romance still smolder. With the energy interests fearful of what the environmentally aware Dr. Meinheimer might recommend to the President, they kidnap Meinheimer and replace him with a dead ringer for the real doctor. They plan to have the fake doctor give a fraudulent report to the President. Only Lt. Frank Drebin can set things right.

When Frank inadvertently breaks down the fence to a private zoo with a battering ram, a variety of exotic animals escape through the opening. This was achieved by calling each animal and enticing them with food by individual trainers who then retrieved each animal. At the end of this scene an orangutan sits in the battering ram with Frank. As an added precaution a special chain link fence was erected around the staging area to protect any animal from straying into danger. Jane, a devoted animal lover, keeps a variety of pets. In one scene she feeds her parakeets, her cat, her dog, lays feed for her chickens, and slops her pigs, all in her apartment. In a T.V. commercial for nuclear energy a dog with two tails, each wagging in different directions, is seen. This was accomplished by way of a special harness which went around the dog's rear and had two fake-fur tails attached to it with an electronic device. The dog's fur was combed over to make it look real. A prop man, using a radio control divice, wagged the tails in different directions. In no way was the dog uncomfortable with the tail action. As Frank is attempting to reach the roof of a warehouse where he can spy on a secret conference, he comes face to face with snarling guard dogs. He manages to evade the dogs and proceeds to scale the warehouse wall with the aid of a rope attached to a grappling hook. He has no idea that when he threw the grappling hook up and over the building it hooked into the harness of one of the dogs. As Frank climbs, the dog is also being pulled upward, acting as a counterweight to Frank. When Frank reaches the top, so does the dog who chases Frank along the building line. Our representative was present during the training, planning, rehearsals and filming of this stunt to assure that it would be achieved safely. The scene was shot in cuts using both a real and fake dog. The fake dog was used to establish the hook being thrown over the roof. A blunted grappling hook was attached to a special harness on the real dog. Trainers gently pulled the real dog to his feet. Trainers then placed the dog on a platform that was raised by a forklift, to create the effect of the dog being pulled up the side of the building. The rope was pulled just enough for the dogs front legs to come off the platform while his rear legs supported the rest of his body. The trainer was on the platform with the dog at all times and mattresses were placed around the forklift as added protection. In one shot where the dog appears to be dangling about ten feet in the air, the fake dog was used. For the rooftop chase a safety net was secured completely around the building and a harness was attached to the dog. The dog ran in ten foot segments from A to B with a trainer on each end. For a scene in which one of the escaped zoo animals, a lion, attacks the villain and knocks him down, the trainer was a double for the actor. One trainer held the lion until cued by a second trainer who held a piece of meat and called to the lion. The lion ran to him and they wrestled on ground.