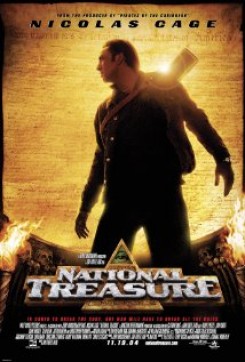 Benjamin Franklin Gates (Cage) has spent his entire life seeking a treasure hidden by the Founding Fathers, who left clues to its whereabouts on the back of the Declaration of Independence. When he learns of a plot to steal the famous document, Ben has only one option: steal it himself. Even if he can pull off this monumental task, keeping the treasure safe means staying one step ahead of the bad guys –and the FBI agents hot on his trail.

One rainy night scene features a two-horse team pulling a carriage through a cobblestone alley and street. To gradually introduce the horses to this action, trainers first rehearsed the sequence at a walk and without the special effects rain and lightening. When the horses felt comfortable with that action, trainers slowly increased the speed to a lope and added the stormy elements.

Experienced stuntmen – not actors – controlled the carriage and slowed the horses to a trot at the end of the alley before the coach rounded the corner and came to a stop. Stuntmen waited at the beginning and end of the run, and for added safety, additional wranglers were stationed at the beginning, middle, and end of the trajectory. All horses wore padded borium shoes and were blanketed between takes.

In one shot, pigeons scatter when Ben runs down a street in a chase sequence. To get these ambient birds to congregate, wranglers sprinkled the sidewalk with canary seed prior to each take. Approximately a dozen pigeons fed on the seed and naturally dispersed when the actor ran toward them.

A historical montage includes shots of a mounted white horse standing on a Revolutionary War battlefield. The mortar explosions seen in this sequence were made of dust and walnut shells and were not noisy, as sound was not filmed at that time. Also, since the director wanted to see only "powder shots" – the white puffs of smoke discharged from the rifle –1/8 loads were used, which produced minimal noise.

American Humane's Animal Safety Representatives also monitored additional scenes that involved horses, an Old English sheepdog, Madagascar cockroaches, and rats. Although these animals did not make it into the theatrical release of the film, the production complied with our Guidelines for all animal action in National Treasure.