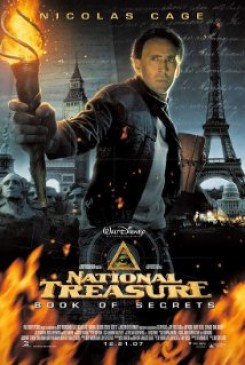 A man jumps on a horse and gallops down an alley. Stuntmen instructed the actor on how to jump onto the horse and ride off. One trainer stood by the horse as the actor mounted it, and another trainer on horseback waited at the actor's end mark. All grounds were inspected for safety ahead of time.

Ben (Cage) and Abigail (Diane Kruger) run down the street and hop into a stationary car, behind which are several dogs. One dog licks the safety camera on the back bumper. For this scene, dogs were placed behind the parked car and filmed one by one on the car's safety camera. Using a hand-held camera, the director then filmed the monitor inside the car that shows what the back bumper's camera is seeing. The dogs were never near a moving car and a trainer standing nearby cued the last dog to lick the camera on the bumper.

The ducks swimming in the pond by the White House in one scene were filmed in their natural environment.

Due to limited resources or scheduling conflicts, American Humane did not monitor all of the horse or dog action in the film.