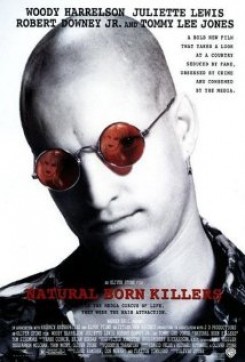 Natural Born Killers is an ultra-violent satire of the road picture/film noire genre offering us poor, misunderstood, young lovers, Micky and Mallory, as a pair of psychopathic mass-murderers who aspire to be like their idol, Charles Manson, but must deal with the uncaring, uptight establishment that tries to prevent them from doing their thing. The great majority of this film is devoted to scenes of violence, murder and sex, with the language keeping pace throughout. Although the violence is depicted in a naturalistic manner, the overall film is rendered in a kind of cartoon/rock music video/surrealistic style that is geared to be unsettling. The film opens in a roadside cafe. Micky orders pie and Mallory dances provocatively with a patron. They then proceed to murder everyone there, except one man. They spare him so he can bear witness and spread their fame. For the next go-around, Micky strangles Mallory's father, who engages in sex with Mallory regularly, with his wife's consent, drowning him in the family's tropical fish aquarium. They continue their fun by setting fire to her mother while she's awake, lying in her bed. This is just the first fifteen minutes of the movie, which progresses on from here in an escalating roller coaster ride of senseless mayhem. The end of the movie finds them responsible for the deaths of thousands of people when Micky escapes, right before his scheduled lobotomy and rescues Mallory from her solitary confinement cell, perpetrating a chaotic, violent and bloody prison riot during their escape attempt. After their successful getaway, they murder a tabloid TV news journalist who covered their breakout, and actively aided their escape efforts. With this behind them, they settle down, have kids and ride around with their happy family, seeing the U.S.A. in an R.V.

There are numerous shots of a variety of animals throughout the film. Some appear in the normal context of the story and others appear randomly, in an abstract, hallucinogenic chaos. There are shots of snakes crawling, a falcon flying, rabbits walking, a rodent, butterflies and assorted insects in the background, horses running with and without riders, and horses in a corral being saddled. There's a quick close-up of a scorpion being run over by a car. Another shot shows dead deer strapped on the roof of a car. Other shots depicting dead or dying animals include a dead horse, an insect eating another insect and a pack of canines tearing at an animal carcass. There is a quick, dimly lit shot of a horse walking among rattlesnakes. It's hard to determine whether or not the horse treads on any snakes. The TV set is on, as the principals share sexual encounter in front of their young, bound and gagged female hostage while they are shacked up in a seedy motel. Among the hodge podge of non sequitur shots on the TV screen are two lions mating, two insects mating, a dog, zebras, a deer, a rat, hippos and birds in the wilds. In a scene where police are patrolling on horseback, Mickey pulls one off his horse, jumps on and rides away. He is then pursued and shot at. In a scene where or heroes take hallucinogenic mushrooms on an Indian's ranch, there are establishing shots of a rattlesnakes, a dog, horses and a herd of sheep. Inside his one-room, dirt floor home, the Indian picks up the rattlesnake, holds it, walks with it to Mallory and releases it on the floor. After the drugs kick in, Micky murders his Indian host while having psychedelic visions, amid random shots of dogs and coyotes. After this, he and Mallory venture out into the night and are bitten by rattlesnakes. This is shown by close ups of snakes biting their boots.