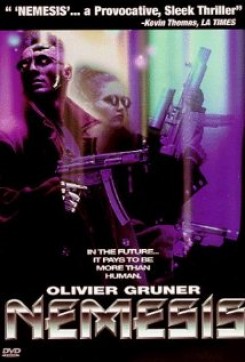 Nemesis is the futuristic story of modern day police and their battle against the evil underground Cyborgs. Set in the year 2027 A.D. in the city of Los Angeles, Alex, an L.A.P.D. officer, is given the assignment of trying to capture the leader of the Cyborgs. This very dangerous assignment takes him to many far off lands and through many hair-raising perdiciments. Alex is captured by the cyborgs and they implant a bomb in his heart, threatening him with it if he doesn't do as they request. Their request is for him to kill the Chief of police. Alex goes along with the initial plan, but adds his own ending to this far-fetched story.

In one scene Alex is fleeing from one of the cyborgs and enters an abandoned building. As Alex is being fired upon, one of the cartridges starts a fire. Alex hears a small whine of a puppy. He finds the puppy and places him in his jacket. He crawls on the floor over to a metal box, where he puts the puppy inside and closes the lid, to protect him from the approaching fire. There is a sudden explosion and Alex is rendered unconscious. When he wakes up he retrieves the puppy, unharmed, from the box. This scene was shot in several cuts. When alex places the puppy in the box before the fire erupts, the puppy was merely placed in the box, then removed immediately as the camera cuts to another scene. The same was done when the puppy was removed. The puppy was never in any area with the fire. In another scene Alex is having an argument with one of the women cyborgs. Alex's dog (this is supposed to be the same puppy as seen earlier after he has grown up) comes to his aid and bites the woman in the arm. The woman screams in pain, removes a hidden gun and shoots the dog, killing him. This scene was also shot in cuts. The dog was trained to grab the actresses sleeve, which was padded, and hold on. The camera then cuts to a view of only the actress as she supposedly shoots the dog. The dog was not present at the time of the gunshots. The dog's "whine" was added in post production. This dog is also seen in earlier scenes walking with Alex as his companion and protector.