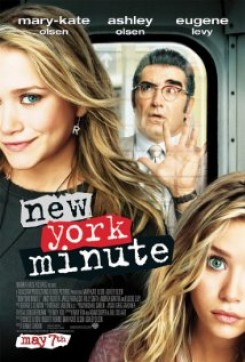 This action comedy follows 17-year-old twin sisters Jane and Roxanne Ryan on a wild 24-hour adventure across, down, and all around town. They may look like carbon copies, but these girls' missions in Manhattan couldn't be more different. Overachiever Jane (Ashley Olsen) is due to deliver a speech to qualify for a prestigious scholarship at Oxford University. Meanwhile, her rebellious sister Roxy (Mary-Kate Olsen) has a scheme to get backstage on a Simple Plan video shoot and slip her demo tape to the band. Roxy and Jane's plans run amuck, however, and the twins must find a way to work together to thwart the myriad forces threatening to jeopardize Jane's college dreams and ship Roxy off to parochial school.

Two female Chinese Crested dogs, Gala and Christine, played the part of "Renaldo". Trainers introduced the actresses to both of the dogs and instructed the girls on their proper handling before filming began. The trainers were always present just off camera during filming.

The twins gallivant around New York City with the dog either sitting in a bag or carried in someone's arms. In one scene, Jane and Roxy have the dog in the bag as they run to catch a cab and while riding in the taxi later. Roxy then takes the dog out of the bag and places "Renaldo" on her lap. "Renaldo" sat perched on some blankets placed inside the bag to make the dog more visible. A camera tow rig pulled the cab and the trainer rode with the cameraman on the tow car. The trainer got the dog to move its head in various directions by holding up a toy behind the cameraman.

The production showed our Animal Safety Rep an animatronic dog that doubled for "Renaldo" in all scenes where the dog appears to be in peril, such as when Roxy holds the dog and shakes it, then throws it out the window; or when Roxy dances at the Simple Plan Concert and falls into the audience while holding the dog. The animatronic would also be used when Roxy and her new friend ride on a motorcycle with "Renaldo" in the boy's backpack; and when the girls go into the sewer and later come up through a man hole. Our rep on set talked to the animal trainers and discussed how the fake dog would be substituted in the above scenes.

When the girls and "Renaldo" run onto the fire escape, jump on some scaffolding and then fall, production confirmed that the real dog was used for this scene but that they filmed in front of a green screen. A fan blowing on the trio made it appear as though they were falling, and the scaffolding actually moved slowly but the film was sped up in post production. Also, when they fall into the Dumpster, the dog is fake; but when the girls pop up out of the trash bin and "Renaldo" moves along the top, the dog is real. A trainer hid inside the empty Dumpster, which had a little ledge built into it that the dog could rest its hind legs on and walk. Another trainer stood behind the cameraman using hand signals to get the dog to walk in the right direction.

Roxy, Jane and "Renaldo" go in for a makeover at a beauty shop. One of the stylists dances with "Renaldo", who hops along the floor on two legs while wearing a red hair piece. The production explained that the costume was specially made for the dog and a trainer stood off camera using a combination of verbal cues and hand signals to achieve the desired action.

In the beginning of the film, a large boa constrictor crawls into the shower while Jane is inside. Then Jane steps outside of the shower and looks a bit shaken while Roxy stands nearby with the snake wrapped around her shoulders. The production told American Humane that this scene was done in two separate shots. A trainer put the snake near the shower and it crawled in naturally. Then the trainer instructed Mary-Kate how to handle the snake and stood just off camera to supervise.