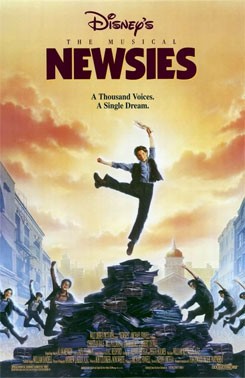 Newsies is a full blown musical extravaganza that tells in song and dance the story of an 1890's New York City newsboy's strife.

The newsies are the young newsboys who purchase the papers each day and then sell them for a small profit on the streets of the city. The boys all come from modest backgrounds and desperately need the money to support themselves or their families. When the great publishing tycoon, Joseph Pulitzer, decides to make more money by charging the newsies more for their papers, they are devastated. Jack Kelly is the leader of the newsies and he convinces them to strike saying that he will organize newsies throughout the city to form a union. Pulitzer refuses to see Jack so Jack tells his story to a reporter for a rival paper, The Sun, who headlines Jack's story as the "Children's Crusade". The story includes a picture of Jack on the front page, which is unfortunate since he is really Francis Sullivan, an escapee from a boy's refuge. Pulitzer calls in the mayor and bribes him to have Jack arrested at a big newsies rally where he can make an example of Jack and break the strike. Jack is arrested provoking a riot at the theater where the rally was held. Despite this temporary setback and corrupt bureaucrats and powerful adversaries, the newsies are unstoppable. Their cause will triumph with a big boost from Teddy Roosevelt, who saves the day.

Horse drawn vehicles such as carriages, trollies and wagons are seen throughout the film primarily as atmosphere. Most of the action was basic A to B movement allowing the horses ample breaks. Jack's friend Dave plans Jack's escape by secretly removing a lynch pin from a carriage so that the horse will take off without the carriage. The horse was protected with special boots to avoid any possible slipping and was also controlled by wranglers who were strategically out of camera range. When the police arrive to break up the rally outside of the theater, some enter the lobby mounted on horses. During the melee a horse rears. This was accomplished by a trained rearing horse, accustomed to film making and people, simply responding to his trainer's cues. Pigeons in a coop add atmosphere to a scene that takes place on a tenement rooftop. Dead poultry hanging from street vendor's stalls were fake props.