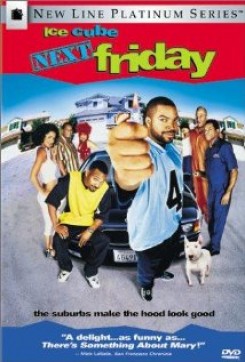 In the first film, Friday, Craig (played by Ice Cube) is responsible for Debo being in prison. In Next Friday, Debo breaks out and wants revenge. Craig has gone to live with his uncle and his family in the suburbs. His parents are hoping he will be safer and can concentrate on his education. It turns out that two doors down from his uncle's house live three brothers who seem to be dealing drugs.

The first animal action that is seen on the screen is a small dog pooping on the lawn. There were two trainers working with the cute Chihuahua in this scene. One trainer placed the dog on his mark over the fake dog droppings. He then used verbal commands and the dog squatted, stepped away and then shook before running to the other trainer waiting off camera. This was done in only one take. The dog is not only cute, but smart too!!

A different Chihuahua was used in the scene where the dog gets excited and jumps up on the actor's leg. When the actor yells the dog jumps down, yelps and runs away. Using verbal cues and hand signals, one trainer stood behind the actor to get the dog to "speak" and jump up on the actor's leg. After the actor yelled, the dog was cued with a hand signal from the second trainer to come to him. The dog exited off screen right into the trainer's arms. The yelp was an added sound effect.

When the two bungling convicts open the doors to the animal control truck they let out 7 dogs of different breeds. Since they are in front of the taco stand, the dogs begin

to nibble the crumbs on the ground. There were two trainers inside the truck helping the dogs exit. There were two other trainers on the side of the truck as well as crew members and actors. If a dog had decided to wander, which none did, they would have had no where to go. Traffic was being controlled by production. Small dog treats were placed on the ground and the dogs picked that scent up as they exited the truck. After the scene was filmed the dogs were taken off the set by the trainers to get a drink of water to wash down those treats!!

The three drug dealers release their Pit Bull and he runs down the driveway and chases Craig to his uncle's house where he jumps onto the car in the driveway. The dog jumps up at him and growls as Craig takes off his belt and begins to strike at the dog. The dog finally grabs the belt in it's mouth and it breaks off and he runs back towards home with it in his mouth. This action was achieved by having one trainer release the dog in the driveway making it appear as if the dog was chasing the actor, but he was really running towards the other trainer who was standing off camera holding some food in his hand. When the dog jumps up onto the car and looks like he is barking and growling at Craig, he is really responding to his trainer hiding in front of the car telling him to "speak." The belt that is used to strike at the dog had a rubber buckle on it and only hit the side of the car. Although it looked like Craig was hitting hard, when it was being filmed the hits were very soft. The trainer wore the same shirt and doubled as Craig when he appears to extend the belt so that the dog would grab it in his mouth. The belt was made from cloth so it tore easily. The dog took the piece of belt in his mouth and was then verbally cued to exit by the trainer who was off camera holding food. The dog happily ran to his trainer and gobbled his reward down.

As the bungling convicts search for Craig, they hitch a ride in his dad's animal control truck. There is only one dog left inside and we see close ups of the dog riding in the compartment between the two men. The trainer put the dog on his mark inside the truck and had the actors say their lines. The dog would look at them with certain expressions and the cameraman captured it on film. Then a trainer sat on either side of this adorable pooch cuing the dog to look from side to side. Later in the editing room, the footage of the crooks was superimposed into the scenes using the trainers.

The unfortunate deliveryman is chased down the street by the Pit Bull. A trainer put the dog on his mark and verbally cued him to run from point A to B where the other trainer was standing with a treat.

When it looks as though the dog is humping the actor's leg, the dog was actually having his belly rubbed by the trainer who was below frame.

In order for the character, Roach, to distract the dog, he brings a package of bologna and feeds it to the dog through a fence. The dog devours it in a few seconds, so Roach offers him a package of marijuana. We see the dog eat it and then appear to be high. It staggers and lays on it's back as Roach lays on the other side of the fence, blowing some smoke from his joint in the dog's face. The trainer stood behind Roach at the fence and had a stuffed toy which the dog barked at viciously while jumping up and down. The bologna was real but browned hamburger doubled for the marijuana and an herbal cigarette for the joint.

The hand filmed feeding the dog through the fence was actually the trainer's. To make it look like the dog was stoned and staggering, the dog was placed on a very large board and the trainers moved it ever so slowly as the dog walked. The trainer used hand signals to have the dog lie down and stand up with Roach at the gate. The whimpering was a sound effect added in post production.

In another scene, one of the convicts is grabbed by the dog. The dog grabs The actor's pant leg and shakes it in his mouth. The trainer was dressed as the actor in this scene and was wearing padding in his pant leg. The dog was given a verbal cue to bite the pants and shake it's head. After a few seconds the second trainer, off camera, called the dog while holding food in his hand. The dog quickly released the pants and exited off to where the treat was waiting.

For more stories on animals and their celebrity humans and other movie news go to "Reel Pets" at www.animalfair.com or see Animal Fair Magazine.