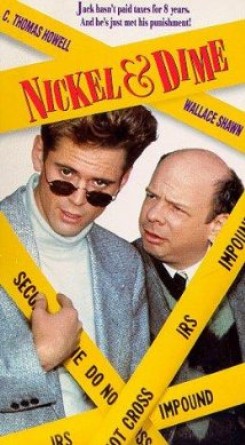 Nickel And Dime is an action-comedy story of Everet S. Willis, a very "to the letter" C.P.A., who has worked for his Uncle Bernie's firm for the past fifteen years. Everet meets Jack Stone, an heir hunter, who's father, also an heir hunter, owes Bernie a substantial amount of money. Jack is being audited by the IRS and stands a very good chance of going to jail without the help of a few loop-holes in his returns. For revenge against Jack's father, Bernie asks Everet to complete Jack's tax returns, knowing Everet will not find any of those "loop-holes". As Jack continues to hunt down potential heirs, with Everet tagging along trying to complete Jack's returns, he stumbles into a smuggling ring, a kidnapping and murder.

Animal action is simple. In one scene as Jack and Everet go to see Cindy, Jack's ex-girlfriend, Cindy commands her two Dobermans to attack the pair and the dogs chase the men to their car. In another scene Jack and Everet return to Cindy's, but this time we see that they have made it to her front door and each dog is lying on the lawn with a large roast bone. In still another scene we see Everet and Jack walking through a group of pigeons who fly away as they approach.