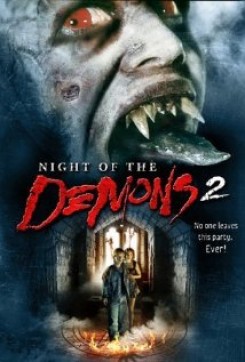 Night of the Demons 2

Night of the Demons 2 is the sequel of the same name. This gory movie is geared for the teenage audience. It starts out at a school for troubled youths, where the girls are making plans for the annual Holloween party. There are rumors of a haunted house on the outskirts of town where a young girl by the name of Angela has been seduced by the devil. Rumor has it that she can still be seen wandering through the mansion on Holloween eve, searching for her sister, Mellissa. One of the girls plans to take a group of kids from the school to a party at this house, but, she "forgets" to tell them where the party is going to be. One of the girls she tricks into going is Mellissa, Angela's sister. As expected, all "hell" breaks loose, with all involved being maimed or murdered, with the exception of Mellissa, who slays her demon sister and escapes unharmed.

Animal action is minimal. In one scene a bug, trapped in some type of goo, is swatted with a ruler. This was actually a rubber bug. In another scene worms are seen slithering and twisting on the floor. The handler had placed the worms on the floor and filmed them acting naturally for this brief shot. A kitten is also seen being picked up and petted.