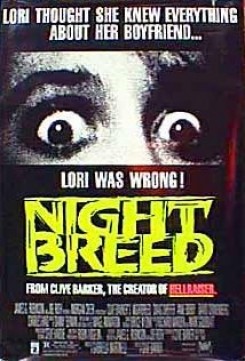 A community is terrorized by a masked slasher who has murdered six families in the past ten months. After a bad episode with some pills given to him by his psychiatrist, Aaron Boone is hospitalized. While in the hospital, a fellow patient slashes his own face off and dies. The psychiatrist, Dr. Decker, tells the police that Aaron may have been responsible and may also be the mystery slasher. Aaron flees to the countryside where he's drawn to a cemetery called Midian and stops to rest. He's awakened from his nap by a dog licking his face. The dog belongs to a mutant-type creature. Other creatures appear and chase Aaron, but they do not go beyond the cemetery gate. However, at the gate, Dr. Decker and the police are waiting for Aaron and Aaron is killed in a hail of police gunfire when he is betrayed by Dr. Decker. Aaron's bullet-ridden body disappears from the police morgue and Aaron awakens in a crypt below Midian, a place where the dead live again. He is told by the creature's leader that they are all that remains of past species that humans have destroyed. They are called "Nightbreed." From these ghoulish digs, Aaron seeks to stop the slasher who continues his bloody rampage above ground.

One of the Nightbreed carries a pet dog about in his arms. Insects, snakes, a parrot and a kitten are seen mostly as atmosphere.