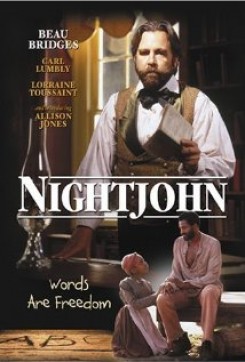 Nightjohn is a film about a slave named Nightjohn, who knew how to read and write. At the time, during the pre-Civil War, slaves were not allowed to learn to read and write. Should a slave have been found to posess these rudimentary skills they were punished by maiming or even death. Nightjohn was sold many times over the years and had taught numerous slaves their numbers and letters. In this particular saga of his life, Sarny, a young slave girl, reveals the story of how Nightjohn taught her her letters and numbers and the price he paid for that gift of knowledge to her.

Horses were used throughout the film either being ridden from A to B or seen pulling carriages. The owner of the plantation is seen several times riding his horse through the fields as he checks on his field-hands.