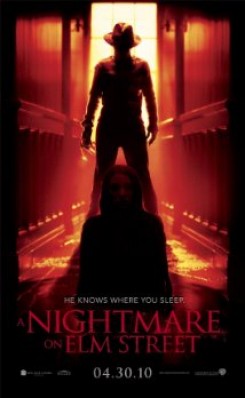 Nightmare On Elm Street, A

A group of teenagers must stay awake to protect each other from Freddy Krueger, a murderous villain who hunts them in their dreams.

Rufus the dog was played by a border collie/Aussie mix named Skeeter. Skeeter is seen performing such mild action as sitting and lying on the floor. For this action, trainers used hand signals and verbal commands to cue the trained dog. Later, the dog is seen lying dead on a lawn. This shot was achieved in the same way. The dog was wearing a fake piece of fur which had fake nontoxic blood on it.

All grounds were inspected for hazards and sets were closed and secured. Cast and crew members were introduced to the dog before filming and instructed on its proper handling.

American Humane also monitored other fairly mild scenes with the dog that were cut from the theatrical release.