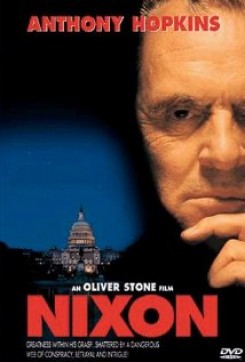 Nixon is a dramatic portrait of not only the American President who resigned his office, but of the man, Richard Millhouse Nixon. In flashbacks which are both memories and dream sequences, we see Richard Nixon as a boy and as a young man reliving the most significant and emotional moments in his life. The filmmaker uses these moments to help associate the past to some of the historic decisions which molded both Nixon's destiny and that of the country. This film chronicle takes us from the Kennedy years and Nixon's devastating defeat in the 1960 election, through to his eventual presidential victory in 1968, the American invasion of Cambodia, the Kent State University massacre, the opening of Red China and finally the Watergate scandal which was to be his downfall. We see him at his best and at his worst, while glimpsing the private man who struggled with his need for power and the guilt arising from the religious fundamentalism that shaped his childhood. We watch as the events leading up to and surrounding Watergate escalate until Nixon has no choice but to resign or face impeachment. Finally, we see documentary footage of Nixon's funeral and find him somewhat vindicated in the end, having been pardoned by President Ford and buried with five ex-presidents in attendance.

Animal action is minimal in this film and consists of horses at a racetrack, two dogs and two roosters. The horses are seen in a racetrack sequence in which Nixon meets with J. Edgar Hoover to enlist his support in an upcoming election. Through a series of quick cuts, we see the start of the race, a terrible series of horsefalls during the race, and subsequent closeups of horses' faces, hooves, eyes, a frothing mouth and a horse getting up from a prone position. The entire sequence was shot in fast cuts, close-ups, black and white footage, color footage and with actors in conversation interspersed with racetrack background. During the fateful race, one horse falls and in so doing trips two other horses who also fall head over tail in his wake. The shots of the beginning of the race and the accident were documentary stock footage. The close-up shots of the horses were staged moments. When we see the horse getting up, it was shot in cuts. Two horses trained to do a lay down and to get up were used. To create the effect of the horse's mouth frothing, shaving cream was applied to the mouth area. Trainers were guiding the horses and present at all times. The dogs are merely present in a few scenes lying on the bed, sitting next to a chair or being petted. In a scene which takes place in Miami where we observe a meeting between E. Howard Hunt and G. Gordon Liddy, two members of the Watergate conspiracy, roosters are seen being held. While the situation is meant to imply that a cock fight is about to begin, in reality they are never fought.