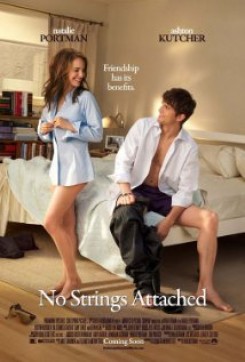 A man and a woman who enjoy each other's company embark on a noncommittal "friends with benefits" relationship, but they realize that it's not easy to keep emotions out of a physical relationship like theirs.

Most of the dog action in this film was mild background action, such as leashed dogs on the sidewalk or at the park. Adam's (Ashton Kutcher) father has a pet Pomeranian seen in a couple of scenes walking from point A to point B, being held and petted, and being sneaked into a hospital under Adam's sweatshirt. For all of these scenes, trainers used hand signals and verbal commands to cue the mild action, which the trained dog was accustomed to performing. The actor was well-rehearsed on how to hold the dog under his sweatshirt (filmed in very short takes), and the dog loved being held close.