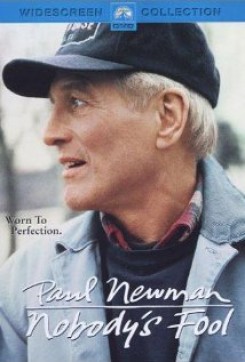 Nobody's Fool is a warm-hearted story about Donald Sullivan, known to all as "Sully." Sully is a man who is down on his luck. After an accidental fall from a scaffold, Sully is unable to get much contracting work, and with the help of his inept lawyer, loses his lawsuit against the Tip Top Construction Company owned by Carl Roebuck. He lives in the house of his ex-eighth grade teacher, Mrs. Beryl, whose son, the banker, wants him evicted. He drives a broken down old truck, keeps losing the trifecta he bets every day, is in love with Carl's wife and generally can't seem to get ahead.

On a cold Thanksgiving in North Bath, New York, Sully's truck breaks down and ironically he hitches a ride with his son whom he hasn't seen in three years. His son, Peter, an English professor with two children and a failing marriage, is back in town to visit his mom for Thanksgiving. Peter harbors resentment toward Sully since he walked out on Peter and his mom when Peter was only a year old. Sully realizes that he doesn't know his son, or his grandsons. Eventually, he learns about Peter's failing marriage and the fact that Peter has lost his job at the university. After Peter's wife, Charlotte, leaves town with one of the boys, Sully asks Peter to work with him in construction. He begins to get to know the one grandson who has chosen to stay with Peter. As the relationship grows, we learn about Sully's past, including the fact that his father was a brutal alcoholic, who not only beat his mother, but caused much of the pain that Sully carries around as a grown man. Sully hated his father so much that he even walked away from the beautiful Victorian family home which has since fallen into shambles due to neglect. Sully, Peter and his son are able to bond and bring warmth and love back into Sully's life.

In an early scene, Sully goes to Carl at the Tip Top Construction Company to ask for some money owed him and to beg for some work. As Sully enters the yard of the company, a large Doberman watch dog barks at him. Carl and Sully have a mischievous rivalry that even includes Carl's wife, Toby, whom Sully loves. Carl is having an affair with a local waitress and Toby is throwing him out. Sully wants her to run away with him and while visiting Toby spys Carl's new snow blower which gives him the idea to steal it, mostly to aggravate Carl. Carl however, steals it back and puts it in his construction yard guarded by the Doberman. This snow blower becomes an ongoing joke in the film and a pawn in the rivalry.

In a funny sequence of scenes, Sully convinces Peter to help him steal the snow blower back. When he and Peter first drive up to Tip Top, they are greeted with the barking of the guard dog. Sully plants some pain killers in a pound of hamburger meat which he puts under the fence for the dog. The Doberman greedily eats the meat. Sully and Peter drive off, but when they return a short time later, there is no barking and there seems to be no dog. Sully boosts Peter over the fence so he can cut the chain and get the snow blower. He hears the dog growl and when he turns, he sees the dog walking on wobbly legs and then falling over. Now safe from harm, they take the snow blower and hide it in Peter's stepfather's garage. For this scene and the earlier one which required the dog to bark, a trainer was present just out of camera range using voice and visual commands to get the dog to respond. The dog was then rewarded with food treats. For the scene where the dog was drugged, no actual sedation took place. The drugged meat was real hamburger into which the actor placed an empty gelatin capsule. To make the dog appear as if it were drugged, the trainer used voice and hand commands to get the dog to walk two steps right, then two steps left, and then slowly lower its head while lying down. These movements were done very slowly and then speeded up in the camera. The gravel and cold ground were covered with rubber padding and a tarp to protect the body of the animal.

In a later scene, the Dobie is lying by Carl's desk and when Sully and Peter arrive to ask for work, the dog goes to hide under the desk. Finally, Carl can stand it no longer and since Sully has "broken" the dog, Carl decides to give it to him. When Sully enters the Victorian house to renovate it, he finds the Dobie tied and barking. Sully yells at the dog and he just lays down and whimpers. Since he now has adopted the animal, he takes it home. When kindly Mrs. Beryl finds the dog in her hallway and asks, "Who are you," he again whimpers and tries to hide under the bench. We see his head tucked under the bench and his buttocks sticking out. The dog finally enters the living room and lays at Sully's feet while he drifts off to sleep. Two Dobermans were used throughout the film One was an aggressive dog who was trained for the barking in more hostile scenes, while the second was a more docile dog used for the scenes where the dog had to be more cowardly. The dogs responded to their trainer's hand and voice commands. To make the dogs appear identical, a non-toxic make-up was applied to one of the dogs to mask some of the tan markings that would have distinguished him as a different dog.

Sully actually turns his life around by finding out that he is a father, a grandfather, a good friend, and loved by many. Not only does Mrs. Beryl pay the back taxes on the Victorian, giving it to Sully as a gift, but Sully himself finally wins the trifecta. He and his dog appear very content by the end of the film.