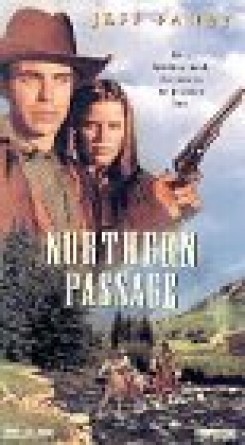 Northern Passage is a story about a man, Donald, and his wife, Mona, living in the mountains in Canada. One day while Donald is out hunting, a trapper breaks into his cabin, raping his wife. In the meantime one of Donald's friends, Simon, hears a commotion coming from Donald's cabin. When he enters the cabin he sees the man on top of Mona but before he can do anything the intruder shoots him. He then slits Mona's throat and leaves them both for dead. Donald is close by and hears the shot but when he gets home it is to late to save Mona but Simon is just suffing from a gunshot wound to the leg.

As Mona lays on her death bed, she makes Donald promise never to abandon their infant son, Peter, as long as he lives. As she dies in his arms, he promises to take their son where ever he goes. Donald, grief stricken, leaves Peter with Simon while he goes out into the winter snow, to look for Mona's murderer. He comes upon a camp site and approaches the man with his gun in hand. The man confesses to the crime, but at the same time trys to act like it was Mona's fault, as he tells Donald how she through herself at him. The code in the white mountains is that you never harm a woman but must always protect them. If a man attacks a woman he is to be killed.

Donald knows that by killing this man and not taking him into the authorities, he will be hunted as a murderer the rest of his life. The anger inside him clouds his better judgement and he shoots the man in the chest, killing him. Donald then finds his identification in his coat and after reading it he burns it so no one will ever know for sure the identity of the man. He goes back to his cabin and writes a confession to the police and asks Simon to deliver it. In his letter he confesses to killing the murderer of his wife, but does not give the assailents name.

Donald leaves taking Peter with him to live in the wilds of the mountains forever to be on the run as a hunted man.

The animal action in this film is mild with the use of basic horse riding and a rabbit in the mountains.

In one scene Peter is a child of about twelve and he is chasing a rabbit. He shoots the rabbit then cooks it and eats it. The rabbit is shown running, as the actor points his gun to shoot. Then the sounds of a gunshot is heard. Next we see Peter picking up the rabbit and walking away with it. The rabbit being skinned and cooked is never shown.

Throughout the film men are seen riding horses through the territory when they are looking for Donald.

The film was shot by a French production company and filmed in Canada.