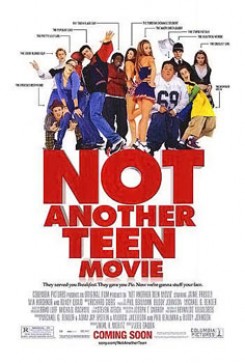 Not Another Teen Movie

Not another spoof on teenage movies! Taking on some of the more recent high school flick clichés and storylines, Not Another Teen Movie is in the subversive spirit of the Scream films' concept - the ability to laugh at the genre it emulates.

Janey (Chyler Leigh) has a pet dog named Roscoe in the film. The part was played by Bosco, an Akita mix. In the beginning of the film, Roscoe jumps onto Janey's bed and bites at the covers. She pushes the dog away and it jumps down. Then the dog stands by the side of her bed and tries to pull the blanket off of Janey. The trainer introduced the dog to the actor in advance so they would both feel comfortable. The dog was put on its mark while the trainer stood off camera using a combination of verbal cues and hand signals to get the dog to achieve the action.

Later, Roscoe lies on the kitchen floor. The dog walks to the oven and closes the door with its nose after Janey's dad removes a pie. The dog lies down again and then puts its paws over its eyes when the dad begins to talk to the pie. The trainer put the dog on its mark and then used a combination of hand signals and verbal cues to motivate Bosco to achieve the action. And, of course, the oven was not actually "on" or hot.

Two pigs, CeCe and Fanny were on call for the part of Sasha. Both were prepped ahead of time and introduced to the cast prior to filming. During the party scenes, Sasha joins in by drinking a beer and smoking a joint. The beer was actually apple juice and the joint was an herbal cigarette and neither one was held directly up to the pig's mouth so the pig did not ingest anything. Later, when one of the young men is injured during a football game and taken on a gurney to an ambulance, the pig follows closely. The trainer set the pig on its mark and stood off camera supervising the action.

Gulls on the Beach

There are several scenes in the film that take place on the beach. Seagulls are seen flying in the air or walking along the sand. Although these birds were filmed in their natural habitat, the production spread some whole wheat bread on the sand to entice the birds to stick around during the filming.