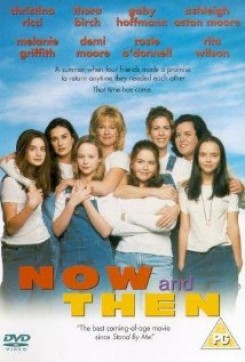 Now and Then is a story about four friends, Samantha, Roberta, Teeny and Chrissy and their reunion in present day Shelby, Indiana. The four girls made a pact in the summer of 1970 that whenever one of them needed the others, they would all come. Now, twenty years later that time has come. Chrissy is having her first baby and she has called Samantha and Tina from out of town to be with her for the birth of her baby. Roberta, now a doctor in Shelby, is going to deliver the baby, so Chrissy wanted them all present at this special time in her life. Samantha, a well known novelist, and Tina, a famous movie star, both take time out to come back to be reunited with their girlhood friends. The story is narrated by Samantha as she takes a step back in time after arriving at Chrissy's home in the old neighborhood, the Gaslight Addition. Chrissy is living in the house that was her parents when the girls were teenagers It looks the same, down to the plastic covers on the furniture. It is a nostalgic and funny portrait about a summer adventure in 1970 that set into motion the elements that would forever shape the lives and loves of the friends in the years to come.

The animal action in this film is minimal with the use of two cats and a rat. In one scene when the girls are teenagers, they are riding their bikes to Greenville, Indiana and stop under a tree. When they look up, there is a bird sitting on a branch. The bird relieves himself on Chrissy's head. First you see the bird sitting in the tree. Then you see the droppings fall onto Chrissy's head. This was not a real bird but rather a puppet. There is a scene where a cat is sitting outside of Tenny's bedroom window sill as she plays dress-up with Samantha. The cat stands up and looks around and then the shot moves on in to Tenny's bedroom interior. In yet another scene, the girls go to visit Samantha's grandmother and she meets them at the door holding a yellow cat. As she lets the girls in, she puts the cat down on the porch and shuts the door. In one scene Samantha gets caught in the sewer while trying to retrieve a friendship bracelet during a storm. While she is looking for the bracelet she sees a rat and screams. The actress and the rat were not seen in the same frame at the same time.