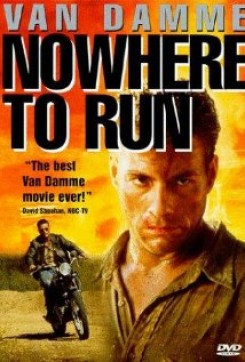 Nowhere to Run is an action-packed adventure that begins with a daring prison escape. Sam is aided in his escape from a prison bus by his young partner in crime, Billy. Sam used to rob grocery stores, gas stations and banks. He took his young friend Billy on a job and just as a bank guard was about to shoot Sam, Billy shot the guard. Sam was caught and sentenced but Billy escaped with the money, vowing to come back for Sam. As they are speeding away from the overturned prison bus, Billy is shot and fatally wounded. The remorseful Sam buries Billy in a remote wooded area, ditches their getaway car in a lake and sets out on foot with the loot from the bank robbery, wearing a new suit Billy has provided for him. While Sam is resting in his makeshift camp, he is befriended by a young boy and girl from a nearby farm. Later, Sam rescues the children, and their mother, Clydie, when their car is attacked by the henchmen of a greedy land developer. Clydie, a widow, allows Sam to stay on her farm and passes him off as her cousin. Clydie has been a victim of various forms of harassment by a corrupt land developer who is after the farm she has lived on since she was a child. Sam thwarts the villainous developer at every turn and in the process Sam and Clydie fall in love.

Shortly after Sam escapes, he hears the sound of a distant explosion and birds fly up from the surrounding trees. To achieve this, a bird wrangler placed cages of birds native to the filming area in the woods. As a pistol was fired, the cages were opened releasing the birds. The pistol was not in close proximity to the cages and the birds were allowed to remain free after the scene was filmed. Shortly before Clydie and her children are attacked by the developer's henchmen, her headlights fall upon a dead cow in the road with other cows milling about behind it. For this scene a cow was sedated briefly by a veterinarian. The sedated cow belonged to a local farmer and was sedated by the farmer's veterinarian. The harassment continues when one night Clydie's barn catches fire and several horses are caught in their stalls. A horse rears in his stall and flames can be seen around him. One horse is frightened and won't leave his stall so Sam leads him out by the reins. Prior to filming this scene the entire inside of the barn was treated with flame retardant materials. The fires themselves were controlled fires using flame bars which were never too close to the horses. Much of the fire effect was achieved with the use of camera angles. A fire department was present during filming and strict safety precautions were adhered to. The scene was filmed in many cuts. Wranglers positioned several horses in individual stalls. Remaining off camera, the wranglers gave verbal and visual commands to the horses who ran about 40 feet from the stalls to the outside of the barn. Fireproof gel was applied to the manes and tails of the horses before each take and the horses were sprayed down with cool water after each take. A trained rearing horse was used for the horse rear and the horse was cued by the actor who tugged gently on the horse's lead rope. The horses remained calm throughout the entire scene and there were no visible signs of panic. There's further harassment when the bullies smash a corral fence with a tractor, stampeding the cattle. This scene was shot in cuts. The cattle were brought into the corral after the tractor smashed part of it down. A barrier was placed in the opening until the filming of the cattle began. Noise was made behind the cattle to start their movement. Mounted wranglers out of camera range rounded up the cattle and led them away. In an exciting climactic scene, Sam flees on a vintage motorcycle as he is pursued by police on horseback, on motorbike and in patrol cars. This scene was shot in many cuts over a period of several days. Much of it consisted of the horses riding from A to B over various types of terrain. All paths the horses would take were inspected for any potential hazards and soft dirt was packed down harder for firmer footing. There are several stunts in this scene. For a horse fall, a trained falling horse was used and all proper precautions were taken. A horse "spooks" and rears, throwing his rider. For this scene, a stunt rider cued his horse, the horse reared and the rider fell.