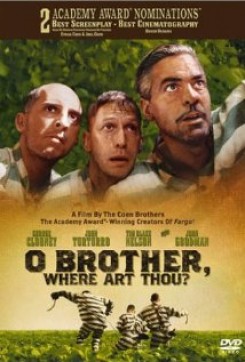 O Brother, Where Art Thou?

Based on Homer's classic "The Odyssey," George Clooney plays a modern-day Ulysses who escapes from a chain gang with two of his convict pals (Turturro, Nelson) in search of the good life.

Early in the film, the debauched trio finds a barnyard with chickens and awkwardly tries to capture one for their meal. One of the convicts is successful and he tucks the flapping animal under his arm. An animal trainer was on-set and instructed the actor how to carry the chicken without harming it.

Back on the run, their next misadventure involves being picked up by infamous gangster "Babyface" George Nelson. A bank robbery ensues and they are again on their way.

As the men speed along a country road in "Babyface's" car, Nelson, who dislikes cows, decides to shoot his machine gun to hit a few of the gentle bovine beasts. The gunfire frightens the cows grazing in nearby fields and they stampede into the road—directly in front of the car. One of the cows appears to be hit by the car and falls down. This sequence was accomplished by attaching a cable to the car so that no contact was ever made with the animals. In fact, the car is never less than 25 feet away from the cows. When the cable is pulled, the car comes to a hard stop, creating the effect of hitting an object. The cow was actually computer generated in post production.

Later, the character Big Dan lifts a frog out of a box, crushes it, and tosses it away. To create this illusion, the trainer initially put a real frog in the box to create an establishing shot. The camera then cut away and the real frog was replaced by a rubber frog. The actor then resumes the scene, picking up the rubber frog instead of the real one.

During the flood scene, a dog paddles underwater and a cow is stranded on the roof of a submerged house. As with the cow in the road, both the dog and the cow on the submerged house were computer generated.