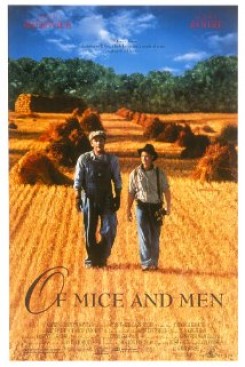 Of Mice and Men

Of Mice and Men is an old-fashioned film in the best possible sense. The classic John Steinbeck tragedy is well- produced and well-directed with exceptionally fine performances by all, and with subtle realism by the two leads in particular. Set in depression-era rural California, the story begins with the two drifters, George and Lennie, fleeing a posse of dogs and men on horseback. They elude their pursuers by hiding in an irrigation ditch so that the dogs lose their scent. The pair arrive at a farm where they have jobs lined up harvesting wheat. Neither George nor Lennie have family. They lead a hand to mouth existence by working on farms or ranches, but they dream of buying a place of their own. Lennie is a hulk of a man with a childlike mind and the strength of an ox, but is unaware of his strength. He has a sweet innocence about him and loves small animals. George is a handsome, but somewhat shy, man with a basic intelligence. A sensitive man, with no family of his own, he feels a strong protective link to Lennie. Trouble starts to brew when the rancher's belligerent son Curley, starts picking on Lennie. Curley's a sadistic little guy who hates big guys. He uses the power of his position to intimidate and humiliate those who are at his mercy due to their circumstances. Another at his mercy is Curley's abused and lonely wife, who seems attracted to George, and has a subtle seductive playfulness about her. With these elements in place, the story unfolds about vulnerable creatures, both human and animal, who must confront the inevitable in a harsh world.

There are scenes at the beginning of the film and then toward the end of the film involving men on horseback and tracking dogs. These were basically simple scenes involving the riders moving from A to B for various distances. In all scenes the area to be covered was examined prior to filming and any obstacles such as rocks were removed from the horses' paths. For the dog's action, trainer number 1 would release the dog who would respond to a second trainer giving the command to cross in front of the camera to the designated area. In an early scene, George takes a dead mouse from Lennie. Lennie had kept the mouse, but because he petted it too hard, he unwittingly killed it. George throws it into a field as they walk along a rural road. A fake mouse was used for this scene. There is a very memorable and poignant scene involving an old farmhand and his equally ancient dog. The other farmhands who share the bunkhouse complain about the odor from the old dog. They insist upon taking the dog out to be shot which the old farmhand sadly agrees to. The dog used in this scene was not old but a three-year-old dog that had a non-toxic make-up applied to his coat to make him appear older. The scene where the dog is shot is performed off camera, but the pain of it is felt through the skillful performance of the actor portraying the elderly farmhand. Another memorable scene involves a tiny puppy that Lennie has adopted. The puppy is seen at various times usually being held and petted by Lennie. However, not knowing his own strength, Lennie accidently kills the tiny puppy. The act is not seen but a heartbroken Lennie holds the dead puppy saying, "Why did you get killed?" A fake puppet was used to portray the dead puppy. Farm animals are seen mostly as atmosphere in various scenes; horses are pulling wagons or plows, a mule is walked across a barnyard, chickens and a pigeon in a barn further enhance the ranch atmosphere.