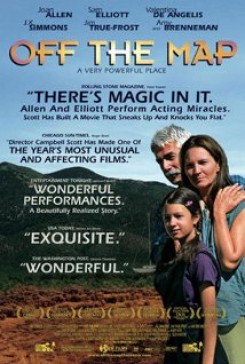 An 11-year-old girl watches her father come down with a crippling depression. Over one summer, she learns answers to several mysteries and comes to terms with love and loss.

American Humane Certified Animal Safety Representatives™ were unable to directly supervise the animal action in Off the Map because the production did not contact American Humane regarding the use of animals in their film. The animals included some chickens in a coop, a dog, a wolf, a rabbit and a dead squirrel.