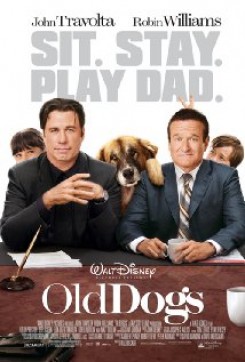 Two single men suddenly discover, without any warning, what fatherhood is like when strange circumstances occur and they must suddenly care for 7-year-old twins.

Charlie (John Travolta) has a pet dog named Lucky. The part of Lucky was played by a shepherd mix named Sebastian. The dog is seen throughout the film performing such mild action as laying or sitting on the floor, in a dog bed or in a human bed with actors, and walking on or off a leash with the actors. This sort of action was achieved by introducing the actors to the dog before filming began and instructing them on the handling of the dog. They also carried treats in their pockets. The dog was placed on its various marks by a trainer. Another trainer stood off-camera using hand signals to get the dog to lay, sit, walk or look in certain directions. The indoor sets were checked for hazards and secured so the dog could not run off.

For scenes in which the dog is shown urinating, a trainer verbally cued the dog to lift its leg. The stream of urine was digitally added in later.

Various dogs attend a reception after a funeral. A young woman carries Charlie's new puppy around. The area was checked ahead of time for hazards. The dogs were all introduced to each other before filming began. They were brought onto the set one at a time, each accompanied by a trainer. The trainer put the dogs on their marks and stood just off-camera using hand signals to get the dogs to stay. The trainer handed the actress the puppy right before cameras rolled and retrieved it right afterward.

The penguin exhibit was a real exhibit in a zoo in Santa Ana, Calif. The cameraman filmed the penguins acting naturally in the zoo exhibit. More penguins were added by computer in post-production to make it appear as if there were many more penguins in the exhibit then there really were. Then other penguins were filmed in front of a green screen on an enclosed set and cued by off-screen trainers to perform various actions. Puppy pens were set up around the area so the penguins could not wander off. All of the footage was edited together in post-production.

Due to limited resources or late notification, American Humane did not monitor any of the petting zoo and the pigeons, or some of the dog action.