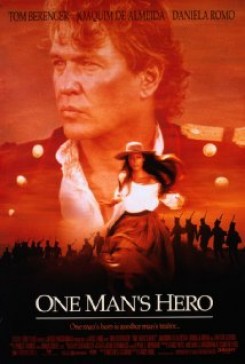 One Man's Hero is a story about St. Patricks Brigade. This group of Irish immigrants deserted to Mexico after suffering religious and ethnic prejudice in the U.S. Army during the Mexican - American War. They fought their battles with authorities on both sides of the border.

One Man's Hero was filmed in Durango, Mexico. During filming, AHA received several anonymous phone calls that alleged wire tripping of horses was occurring. This project was filmed outside of AHA's jurisdiction. While they could have chosen to work with AHA voluntarily, they refused to do so and refused to give AHA any information regarding the use of animals on the project. The film opened on September 24, 1999. Based on AHA's 60 years of experience in monitoring animal action in film and after seeing the film, it appears that horses were tripped with wires. As the producers have chosen not to provide information to the contrary, we are rating the film "Unacceptable". We regret that the production chose not to cooperate with American Humane Association. In addition, the producers state in their end credits that no animals were harmed in the making of the motion picture. This statement at the end of the film is not an endorsement by AHA and should not be mistaken as such. Since the film was released, AHA has received numerous calls from the public expressing concern about what they have seen on screen. Wire tripping of horses is illegal in the United States and American audiences are sensitive to animal welfare issues.