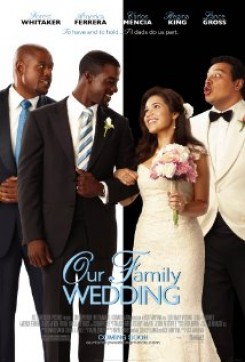 When a young couple of different ethnic backgrounds gets engaged, they are forced to deal with their stubborn and bullheaded fathers, who do not see eye to eye. The couple must endure stressful and wacky situations as the two families help prepare for the wedding.

A goat is seen performing such mild action as sitting, standing, lying, walking, running, and jumping onto or off of objects. For all of these scenes, trainers used food, buzzers and verbal commands to cue the mild action, which the trained goat was accustomed to performing. For the scene in which the goat knocks a box of pills off a sink and eats the pills, the pills were candy and safe for the goat.

In one scene, the goat jumps out of an empty bathtub, pins a man against a wall with its front hooves and begins to hump the man. For this scene, the tub was an oversized, custom-made prop with a padded surface, and the trainer hid inside it with the goat. A small padded ramp was built and secured inside the tub to make it easy for the goat to exit onto the carpeted floor. One trainer stood just off-camera shaking a bucket of grain and cued the goat to walk over and get "up" onto the man. Then the actor held the front legs of the goat while the trainer placed his hands on the goat's hips and pushed them back and forth.

In another scene, the goat jumps onto a table and breaks through a stacked pyramid of wine glasses, then jumps back onto the floor. The glasses were plastic and the table had pieces of carpet adhered to it for better traction. The trainer cued the goat while walking alongside the table at the same pace as the goat. The vase that falls behind the goat was specially rigged and controlled by a crew member who made it fall a safe distance from the animal.

These scenes were all well-choreographed, and the goat and actors were well-rehearsed. All grounds were inspected for hazards and the sets were closed and secured. Cast and crew members were introduced to the goat and instructed on its proper handling before filming began.